Bruce Springsteen Discusses His Early Years, First Song He Ever Learned to Play, and Letter to You on Fallon: Watch 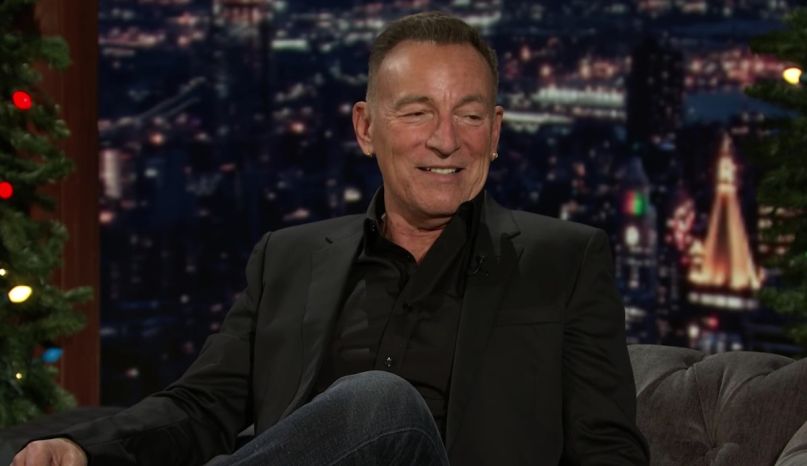 Ahead of his performance on Saturday Night Live this weekend, Bruce Springsteen sat down for a career-spanning interview on The Tonight Show Starring Jimmy Fallon. The extensive chat on Thursday’s episode saw The Boss recall the early days of his career, the first song he ever learned to play, and the prospect of one day releasing a proper Christmas album. He also discussed his recently released album, Letter to You.

While talking about his teen years, a wistful 71-year-old Springsteen recounted one of the first bands he ever played in. Although he and his two bandmates stayed together for just three years, it was with this group that he said he learned all of the basics of being in a rock outfit, from performing to songwriting.

He also fondly looked back on their nights spent playing places like VFW halls — “definitive but small gigs when you’re just learning your chops and your way” — and even specifically remembered one show in Freehold, New Jersey where he played the first rock song he ever learned on guitar: The Beatles’ “Twist and Shout”. But to Fallon and the audience’s surprise, Springsteen revealed that technically, the first-ever song he learned was the traditional folk song “Greensleeves”.

“Greensleeves” is often associated with the holiday season, but don’t hold your breath waiting for a Christmas record from The Boss. “We did some big Christmas shows in Asbury Park for a while, and I tried to piece together something from those shows, but we’d have to go in the studio,” Springsteen explained to Fallon. “The thing is you only really want to do it around Christmastime, but you don’t want to do it then either because it’s around Christmastime, you don’t feel like working. And Christmastime goes away, then you got to do it in the summertime when you just don’t feel like it, so we haven’t gotten around to it. Maybe one of these days.”

For now, fans will have to make do with his cover of “Santa Claus is Coming to Town”, which officially turns 45 (!) this year.

The conversation naturally turned to Springsteen’s Letter to You, voted one of our Top 50 Albums of 2020. “I always liked music where the singer sounded happy and sad simultaneously,” Springsteen remarked. “Those are kind of songs that I like, that I think hit the deepest — if you’re lucky enough to write one or a small group of them — and Letter to You kind of strikes that balance. It’s a record I’m really proud of.”

Watch all of Springsteen’s interview segments below. For more of the rock icon, he and Jack Antonoff just performed their collaborative single “chinatown” from a NYC rooftop.

Thursday’s Tonight Show episode was especially jam-packed, as it also featured an interviewed with J Balvin and a performance from Mandy Moore. If that weren’t enough, Lil Nas X also dropped in for a holiday rap battle with Fallon. Scroll on to find those videos.