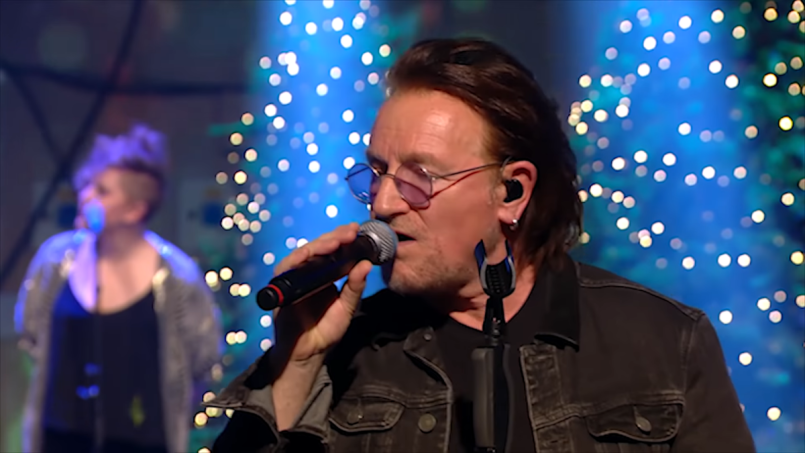 During a normal Christmas season, Glen Hansard and a gaggle of other Irish musicians would busk in the street to raise money for Ireland’s homeless population. This year, in order to abide by social distancing guidelines, the fundraiser was turned into an indoor livestream affair, and U2‘s Bono and The Edge showed up to keep the Christmas spirit intact.

The duo performed a beautiful acoustic rendition of the Darlene Love staple “Christmas (Baby Please Come Home)” on Ireland’s  Late Late Show. The U2 bandmates were joined on stage by Hansard, Philip Powell, violinist Vivienne Long and the Heyday Choir (via the IIrish Times). U2 released a recorded version of the cover way back in 1987, but seeing it performed in front of shimmering lights and ornate Christmas trees gives it a particularly special touch.

After that tune, everyone but Bono and The Edge left the stage and the two musicians performed an acoustic version of the U2 classic “Walk On” from their 2000 album All That You Can’t Leave Behind. Check out both performances below.

Once the gigging was over, the bandmates stuck around to chat with host Ryan Tubridy about music and their 10 million Euro donation (that’s over $12.25m USD) to COVID-19 relief efforts in Ireland.

“Any public advertisement of giving away money is PR, so I just want to be clear about that,” Bono said during the interview. “So if we are giving anything publicly, I think you’ve got to accept its a kind of exercise in self-promotion, and we’ve always tried always to avoid that — in this country especially — over the years.”

He continued, “There was a lot of fighting in the band about this, but we felt like we had to come out and show solidarity. If we can’t be really useful, let’s find the people who are and try to get them protective wear.”

The Edge added, “We’re so fortunate, and so many people were far more impacted than we were, but actually it’s the people risking their lives to help others, they really needed support and deserved support.”

Back in October, U2 released a 51-track deluxe reissue of All That You Can’t Leave Behind as a celebration of its 20th anniversary. The group has been relatively quiet throughout the pandemic, but Bono and The Edge did team up over the summer to cover Led Zeppelin’s “Stairway To Heaven”.