The heartwarming moment was part of Bocelli's "Believe in Christmas" concert 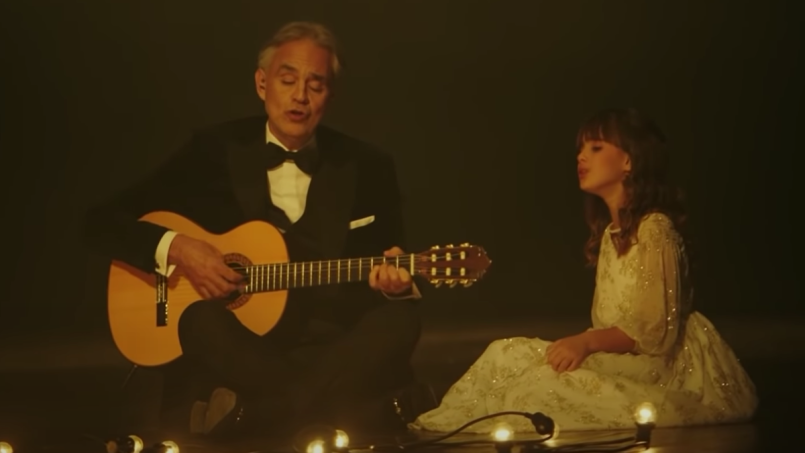 Early on in the pandemic, Andrea Bocelli performed a special Easter concert in Milan called “Music for Hope”. To uplift spirits again this holiday season, this past weekend Bocelli delivered yet another inspirational performance in Italy — and this time, with help from his own young daughter.

Aptly titled “Believe in Christmas”, the concert event took place on Saturday, December 12th at the gorgeous Teatro Regio di Parma opera house. Bocelli sang a few selections from recently released album, Believe, as well festive standards like “White Christmas” and “Amazing Grace”. However, it was his cover of the Leonard Cohen classic “Hallelujah”, performed in collaboration with his eight-year-old daughter Virginia, that easily stole the show.

The father/daughter duo belted out “Hallelujah” while sitting on the stage surrounded by a string of lights. Bocelli played acoustic guitar and handled the lead vocals — divinely, as usual —  with Virginia harmonizing throughout. In addition to being a purely heartwarming moment, the pair sounded very lovely together. It’s no wonder they often duet.

Watch the “Hallelujah” cover below, followed by a trailer for “Believe in Christmas”.

Bocelli, who has since recovered from COVID-19, explained on Instagram why it was important for him to perform during the Christmas season,

“A magical place where humankind tell their story and put their values on the stage: there is no better place than the theater to experience Christmas together, along with everything it brings, from deep, sacred aspects to those that awaken the privilege of the childish naivety we once had.

To ‘Believe in Christmas’ means to believe in the miracle of life and the love that protects it. The songs I will sing (along with some amazing guests, the choir and the orchestra, and with the invaluable assistance of Franco Dragone, who will imbue every note with pure theatrical enchantment) serve to underline one thing: life triumphs. It’s my way of embracing you, one by one, and wishing you, once more, ‘Merry Christmas.’