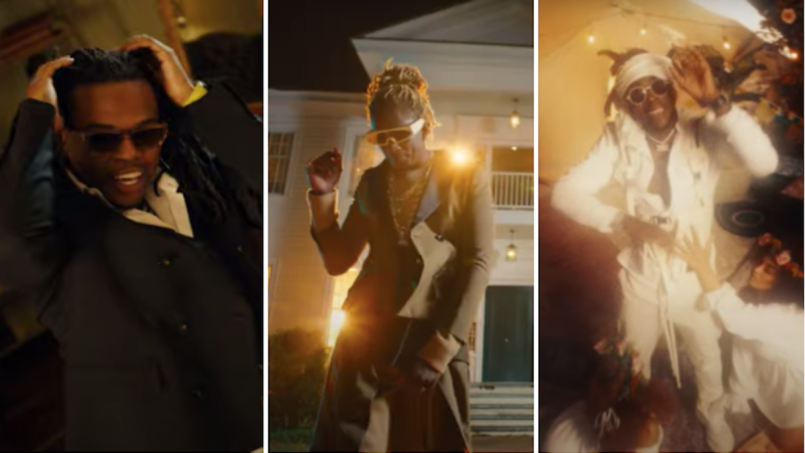 Gunna, Young Thug, and Yak Gotti in "Take it to Trial" video

Hip hop’s resident eccentric Young Thug and his label imprint Young Stoner Life are preparing to drop the compilation album Slime Language 2. The first single finds Thugger, Gunna, and Yak Gotti in a defiant mood, and if you’ve got a problem with it, you’re welcome to “Take It to Trial”.

The original Slime Life came out in 2018, and while Young Thug played host on almost every song, it served as a coming-out party for rappers on the rise including Gunna and Lil Keed. Two years later, “Take It to Trial” isn’t just a sly jaunt through Atlanta trap, it’s also a signal boost for Yak Gotti, who linked up with YSL earlier this year to release the mixtape Gotti Outta Here.

Gotti acquits himself well with a start-and-stop flow that begins with a demanding baby mama and goes on to challenge the Feds and rivals. Gunna settles into the pocket of the Weezy beat and takes a spin through expensive cars, loud guns, and enthusiastic sex. But there’s a reason that 29-year-old Young Thug is the face of the imprint. His hook, “Take this shit to muthafuckin’ trial!” is both simple and sticky, while his verses pack a torrent of punchlines and show-stopping descriptions.

The accompanying music video finds the three MCs lording over a manor house, flicking off cops at traffic stops, and enjoying the company of beautiful women, sometimes while under house arrest. Check out “Take It to Trial” below.

No release date has been set for Slime Life 2, though in the YouTube description of this video, YSL said it is coming “soon.” Last month, Thugger revealed on T.I.’s podcast that Punk, the full-length follow-up to his stellar 2019 album So Much Fun, is also close to finished. Young Thug continues to be an in-demand features artist, and he’s recently contributed to tracks by Aminé, Lil Keed, Big Sean, Travis Scott, Lil Durk, and Megan Thee Stallion.