Zooey Deschanel Plays Katy Perry in Music Video for “Not the End of the World”: Watch 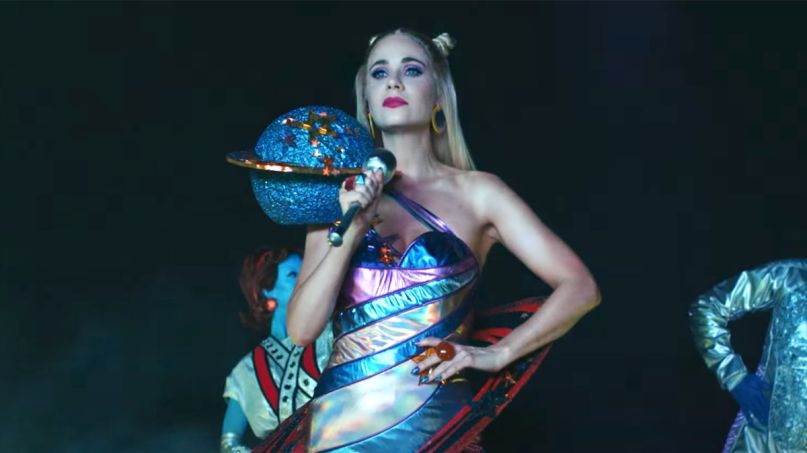 A decade ago, Katy Perry released her smash hit “California Gurls” which helped cultivate her image as a candy-laden pop culture icon. Perry has since become a major pop star and, of course, has gone through dozens of trademark looks. But back in her sugary hey-day, the Teenage Dream singer was regularly mistaken for Zooey Deschanel. Now, years later, Perry is finally poking fun at their similarities by casting Deschanel in her “Not the End of the World” music video.

In the clip, both Perry and Deschanel can be seen going about their daily lives on Earth when suddenly a bunch of “California Gurls”-obsessed aliens mistakenly identify the actress for the pop star. They beam up Deschanel into their spaceship and shower her with fandom-driven praise. When The New Girl star tries to explain that they’ve grabbed the wrong person, though, the aliens claim she’s suffering from a bout of amnesia and should thank them for saving her. Why? Because the entire planet is apparently mere seconds from exploding.

The rest of the music video sees Deschanel accepting her fate as an outer space deity. She plays into the scenario by batting her blue-eyes, letting the aliens dress her up in various outfits from Perry’s career (AKA a whipped cream bra, a curly blue-haired wig, and an oversized planetary dress), and eventually climbing onstage in a blonde wig to perform “Not the End of the World” for their amusement. It’s absurd and navel-gazey, but then again so are most of Perry’s music videos. Watch it below.

“Not the End of the World” is the latest single Perry has chosen to promote from Smile, her new album and sixth studio full-length overall. Perry also released a bonus track called “Never Worn White”, which she used to confirm she was pregnant with her first child with Orlando Bloom.