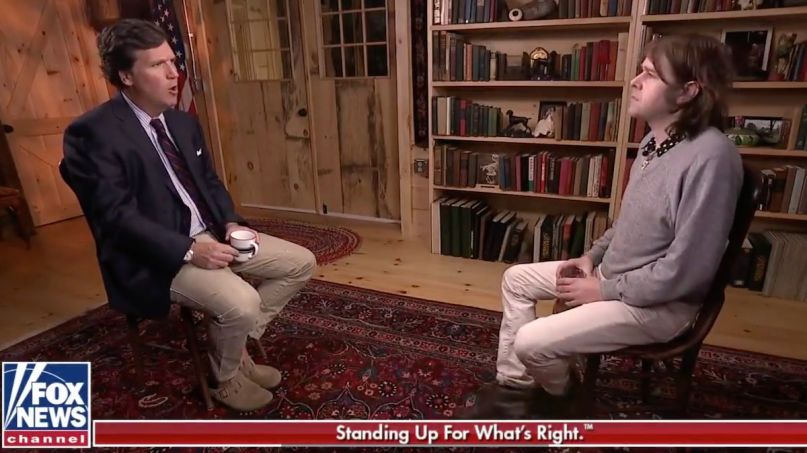 Ariel Pink appeared as a guest on Tucker Carlson Tonight on Thursday discuss the fallout from his attendance at Donald Trump’s “Stop the Steal” rally last week.

The musician found a sympathetic ear in Carlson, who titled the segment “Standing Up For What’s Right” and kicked off their chat with a statement rather than a question: “Artists do transgressive things, and you did the most transgressive thing — you came out as a Trump supporter.”

Pink stood by his story — that he merely attended the “Stop the Steal” rally, but then went back to his hotel room and fell asleep as Trump supporters stormed the US Capitol. Nevertheless, he proclaimed himself to be a victim of cancel culture and said his former record label, Mexican Summer, bowed to the mob by dropping him. “It leaves me destitute and on the street,” Pink said of the label’s decision. He also claimed that he and his family has received death threats, but was willing to risk his life in order to appear on Carlson’s show.

Over the course of the interview, Pink repeatedly contradicted himself. He said he voted for Trump as a vote against cancel culture. Moments later, however, he argued that canceled culture “is not real,” only to then claim that he himself had been canceled “many times and I know how the whole thing works.”

Pink also said he believes Joe Biden’s victory was legitimate, which doesn’t explain why he attended a rally with the sole purpose of undermining the results of the election. “There’s been a very big effort to unseat the President,” Pink commented. “I think he lost fairly — I’m not disputing anything.” He then called Democrats “sore winners” who “want to kick us while we’re down.”

Carlson also failed to bring up the ongoing legal battle between Pink and his former girlfriend and bandmate, Charlotte Ercoli Coe. As we learned earlier today, Pink has been accused of abuse and harassment by Coe, and was recently dealt a legal blow when a court threw out his attempt to get a restraining order against her.