Baby Dancing to Tool’s “Invincible” Will Lift Your Spirits During These Dark Times: Watch 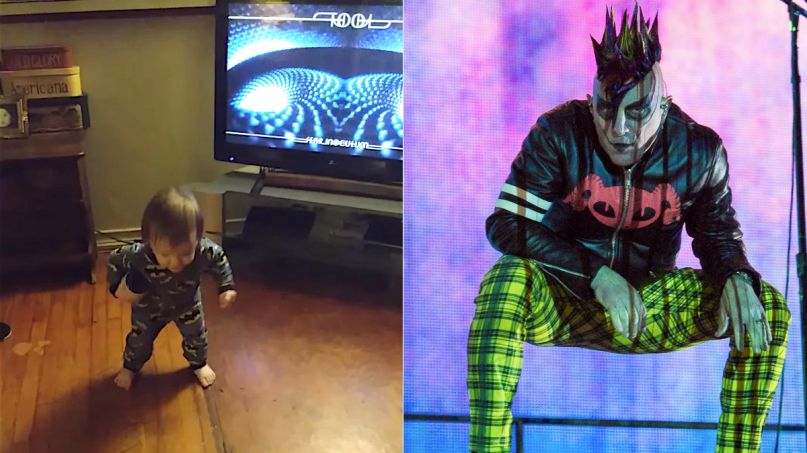 With a pandemic still plaguing the world and insurrectionists storming the U.S. Capitol, we need a bit of levity in these dark times. That’s where a new video of a baby dancing to Tool’s “Invincible” comes in, brightening our spirits with every one of his little stomps.

We stumbled on this video in its infancy, and we’re not just talking about the baby’s age. Criminally, it only had 20 views since being uploaded just before Christmas by YouTube user Mom of Five.

With the Fear Inoculum track “Invincible” playing on the family’s television, complete with a graphic of the album cover, the little Batman-pajama-wearing toddler seems to be drawn to the music. As he makes his way to the TV with his sippy cup in hand, he really connects with the song, as Maynard James Keenan’s entrancing vocals pull him closer and closer.

And it’s not just a random reaction, as seen by the baby’s shift in movements during the drum break. Suddenly, the youngster transitions from a headbanging body heave to a meticulous foot stomp, acknowledging the masterful Danny Carey’s moment in the spotlight.

When the song ends, the young Tool fan utters a noise that almost sounds like, “That’s all?” He wasn’t ready to stop, but the good news is there’s plenty more tracks on the album, and they mostly clock in at more than 10 minutes each.

Tool were only partway into touring in support of Fear Inoculum when the pandemic put a halt to the trek. Hopefully, we’ll see the beloved metal act on stages again at some point this year. Until then, enjoy the dancing of one of their youngest fans in the video below.