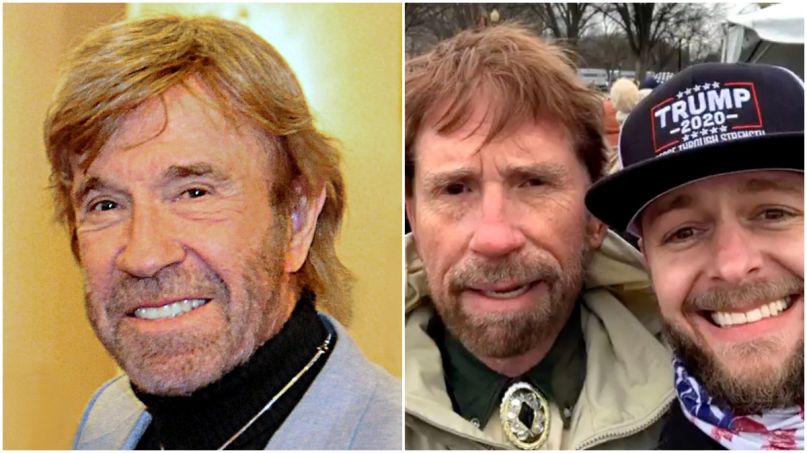 Chuck Norris wasn’t at the MAGA capitol riot, but his doppelganger sure was. After a photo began circulating on social media that appeared to show the 80-year-old actor posing at last week’s insurrection, his representative Eric Kritzer has confirmed that it isn’t Norris in the photo, but a fraudulent imposter.

“This is not Chuck Norris and is a wannabe look-alike although Chuck is much more handsome,” Kritzer said in a statement delivered to PEOPLE (via EW ). “Chuck remains on his range in Texas where he has been with his family.”

Although it wouldn’t be surprising to learn that the long-time Republican and ex-TV cop who’s regarded as a symbol of American masculinity was present in a mob of people who live and breathe that shit, the guy standing next to that grimacing imbecile is just an extremely convincing double.

As it turns out, the guy in that one photo, who’s been identified as Matthew Bledsoe, wasn’t the only Trumper who was duped by the Norris knockoff. Another photo that hasn’t gotten nearly as much Twitter traction shows the man posing with two other MAGA cultists who apparently thought that a celebrity meet-and-greet with the Walker Texas Ranger was part of the day’s agenda. Sad.

Even though Norris wasn’t present at the rally, a few other well-known entertainers were. Indie artists Ariel Pink and John Maus were infamously lambasted (and Pink was dropped from his label) for posting photos of their attendance, and Jon Shaffer of the metal band Iced Earth was actually photographed storming the Capitol and is currently wanted by the FBI.

Wait, so are we just not going to mention the fact that Chuck Norris was at the MAGA insurrection? pic.twitter.com/aIukJpoCmF

Saw this on my Facebook today. Chuck Norris was in DC proudly supporting Maga and Trump pic.twitter.com/KN40VrR7FJ