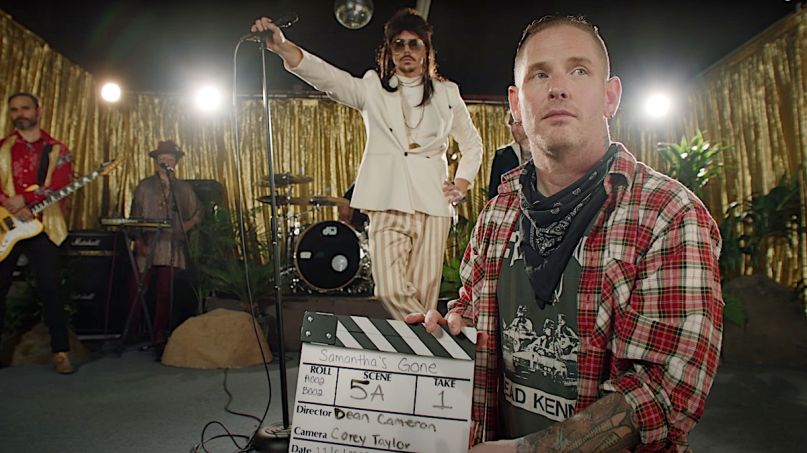 The backdrop is the set of the video shoot for the song, a track on Taylor’s recent debut solo album, CMFT. Sandoval appears as a mulleted frontman of an overzealous indie-rock band that also features Greg Grunberg (Star Wars movies), Latin musician Travis Miguel, guitarist Ace Von Johnson (Faster Pussycat, L.A. Guns), and musician Jonah Nimroy. As they deliver a ridiculous performance of “Samantha’s Gone”, the director (played by Cameron) screams in disgust.

When he begs them to stop, Taylor and his actual solo band, who were working as the crew on the video shoot, take over the instruments and show ’em how it should be done — all as the members of Steel Panther (also part of the video crew) look on. But it doesn’t end well for Taylor and company either.

“The video for ‘Samantha’s Gone’ served two purposes: making fun of so-called ‘indie rock’ bands and getting all my friends together to hang out and have a good time,” said Taylor of the video. “We all went back and forth between having fun and social distancing. Watching the first ‘band’ was great, then being fired from our OWN song in favor of Steel Panther was the icing on the cake — can’t wait for everyone to see it!”

Back in October, on the day CMFT was released, Taylor and his band performed a streaming arena show from The Forum in Los Angeles, giving fans a much-needed jolt of rock ‘n’ roll during the pandemic. One of the album’s other singles, “Culture Head”, landed on our list of the Top 30 Metal + Hard Rock Songs of 2020.

Watch the video for “Samantha’s Gone” below, and pick up Corey Taylor’s CMFT album here.