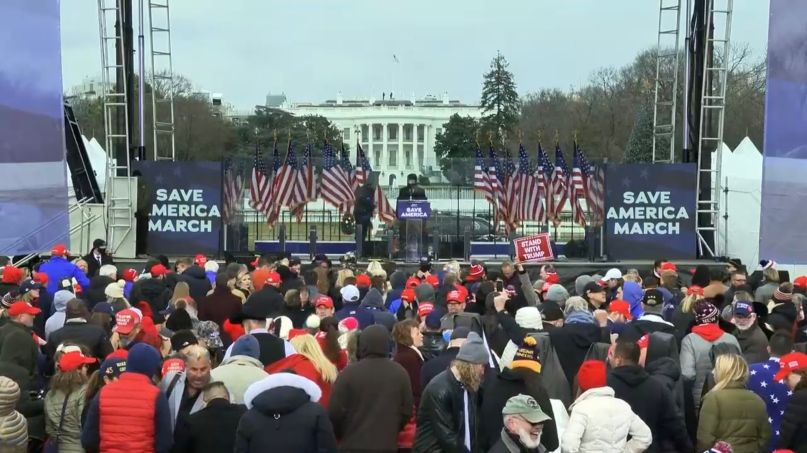 The DJ at Donald Trump’s farewell MAGA rally was either an utter genius or a complete imbecile. While Trump’s cronies desperately cycled on-stage in Washington D.C.’s Ellipse to protest Trump’s obvious election loss, the person on the ones and twos slyly soundtracked the event with famous songs about defeat.

As Uproxx points out, the DJ at Trump’s Save America Rally selected a funeral mix that included Celine Dion’s Titanic theme “My Heart Will Go On”, the iconic score for a movie about a historic disaster; Linkin Park’s “In The End”, a song about trying “so hard” but losing it all anyways; and Elton John’s “Funeral for a Friend”, a song that John wrote while imagining his own funeral.

At a rally that’s supposed to fire up Trump’s base of Proud Boys and MAGA freaks to protest the Democratic Senate wins in Georgia and the Joe Biden’s presidential win they’ve been contesting since November, it’s some pretty sweet candy to see this swarm of losers getting hyped up to tunes about, well, losing.

However, as fun as it is to imagine that the DJ is in on the gag, there’s a very strong chance that they’re also a MAGA shithead who’s as painfully oblivious as Trump and his supporters are when it comes to lyrical context. Trump’s favorite walk-out song is Village People’s queer anthem “Macho Man”, a critique of masculinity that Trump believes is a celebration, and that the group have asked him to stop using.

Furthermore, his supporters blasted Springsteen’s antiwar anthem “Born In The USA” when Trump was stuck at Walter Reed with COVID-19, and some of the dimmest bulbs in the MAGA cult even claimed Rage Against The Machine’s anti-fascist banger “Killing In The Name” when they were protesting the election results in Pennsylvania: i.e., rooting for fascism.

Therefore, as hilarious as it is to believe that the DJ at this pitiful event was doing epic satire and that he couldn’t possibly be foolish enough to have chosen this playlist in earnest, this was a political camp that put Rudy Giuliani in charge of their legal team. We’re not working with the A-Team here.

Either way, watching it all unfold is very entertaining. Check out a bunch of different clips below.

Meanwhile, “My Heart Will Go On” is playing at the pro-Trump rally in DC pic.twitter.com/wFWTuoYZ8N

Amazing interview on Fox News as Brain Damage by Pink Floyd is playing in the background pic.twitter.com/WAZGSu7ZlI

Linkin Park’s 2002 hit “I Tried So Hard” is playing over a movie montage at the Trump rally today. pic.twitter.com/VsunLRa28C

Watching a crowd of Proud Boys listening to @celinedion's my "Heart Will Go On" while waiting for @realDonaldTrump is my new favorite thing about the 2020 election. #MAGA pic.twitter.com/E4k7fRIAjM

The lyrics to the song playing ahead of Trump’s speech are “I tried so hard, and got so far, but in the end, it doesn’t even matter.” https://t.co/tGGdgefzaW