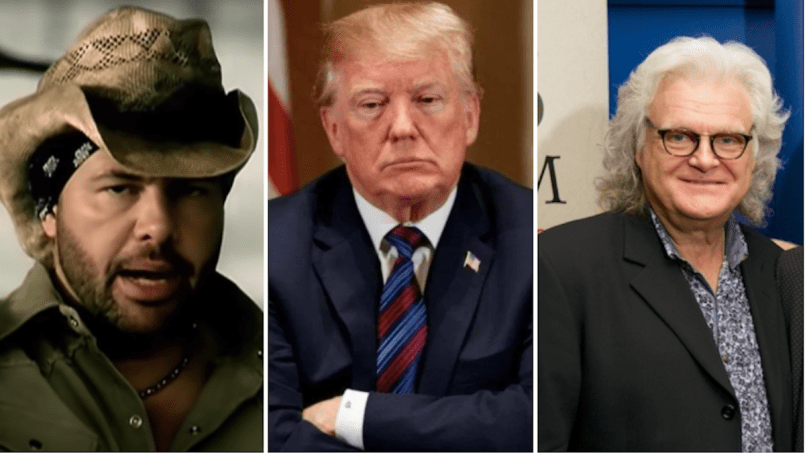 Donald Trump lives in an alternate universe where he never lost the election, never incited an insurrection, and Toby Keith is good. We saw that play out during his second (!) impeachment hearing, when Trump reportedly holed up in the White House’s East Room, pretending it wasn’t happening and giving National Medals of Arts to Keith and Ricky Skaggs.

Bloomberg reporter Jennifer Jacobs and NBC News’ Peter Alexander separately broke the news on Twitter. As the House of Representatives voted to impeach, Trump took the time to honor country-bluegrass veteran Skaggs and jingoistic warmonger Keith. As The Hill notes, both had previously offered their support for Trump. In 2016, Skaggs said that, “I believe Donald Trump is the right person in the right place, and that it’s prophetic.” As for Keith, the author of “American Soldier” and “Courtesy of the Red, White, and Blue (The Angry American)” not only performed at Trump’s inauguration concert, he also accompanied him to Saudi Arabia in 2017 for a “men only” concert.

Via the National Endowment for the Arts, the National Medal of the Arts is given to artists who “are deserving of special recognition by reason of their outstanding contributions to the excellence, growth, support and availability of the arts in the United States.” Trump had previously bestowed the honor upon Alison Krauss, the insufferable sycophant Jon Voight, and all the musicians of the United States military.

Whether Trump likes it or not, Joe Biden will be inaugurated as President on January 20th. The former Vice President recently announced his own inauguration concert lineup, including Justin Timberlake, Demi Lovato, Jon Bon Jovi, and Tom Hanks.

NEWS: Amid impeachment effort, Trump is giving medals to @tobykeith and @RickySkaggs — national medal of the arts, several sources tell me

Trump is currently in the Oval Office awarding the National Medal of Arts to singers Toby Keith and Ricky Skaggs, minutes after becoming the first president ever impeached twice.