The artwork, created by Robert Vargas, was revealed to coincide with the late guitar icon's 66th birthday 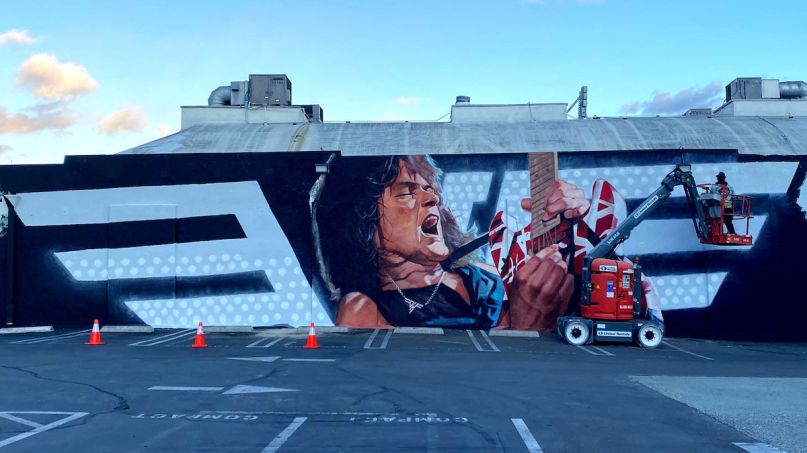 A large mural depicting the iconic Eddie Van Halen was unveiled at the Hollywood Guitar Center on the Sunset Strip on Tuesday, in commemoration of what would’ve been the late guitarist’s 66th birthday (January 26th). The artwork was created by local muralist Robert Vargas.

The Van Halen guitarist died on October 6th, with countless tributes coming from his musical peers in the ensuing weeks. The new mural now immortalizes the Rock & Roll Hall of Famer in painted form, with Vargas’ artwork taking up an entire outer wall at the back entrance of Guitar Center’s flagship Hollywood store. The piece, which stands at 17 feet tall by 105 feet wide, depicts Eddie playing his famous “Frankenstrat” guitar.

“Eddie was one of my creative heroes. When I was young, the debut Van Halen record was the first album I ever owned,” remarked Vargas. “He influenced me over the years in so many different ways. As soon as the news hit of his passing, I knew I had to do something creative to memorialize him, and Guitar Center was the obvious venue. Right here on the Sunset Strip, where the band made their bones — I can’t think of a better place for this tribute to him, and I thank Guitar Center for giving me the canvas to share it with the world.”

Vargas added, “When you work hard at something, you can reach your full potential. Be true to your art, and your art will be true to you. I had the chance to meet Eddie a few years back, and because he and I connected on the nature of art and creativity, painting him here is therapeutic. Thank you, Guitar Center for allowing me to use my creative process to connect with him one more time and share it with the world.”

In 2020, Vargas painted a giant mural of late Los Angeles Lakers legend Kobe Bryant, who tragically died in a helicopter crash on Eddie Van Halen’s birthday a year ago today.

Prior to the mural, Eddie’s handprints had already been a fixture on Guitar Center Hollywood’s famous RockWalk. The chain’s category manager, Jean-Claude Escudie, commented, “Eddie Van Halen was a truly monumental force in rock music. He made lead guitar playing popular when it might have been slipping away into punk and new wave minimalist territory, and then basically the entire 80s hard rock scene followed in his wake.

Escudie continued, “Guitar Center saw this first-hand, as generations of lead guitarists have flocked to our stores to try to capture something of what inspires them about Eddie’s sound. Besides that, sometimes people forget that he was an immigrant and multi-racial, so in so many ways his story is the story of the American experience.”

Eddie Van Halen passed away after a long battle with lung cancer, with his immediate cause of death listed as a stroke. See Robert Vargas working on the mural in the Instagram clips and photos below, including a visit from guitarist Zakk Wylde.