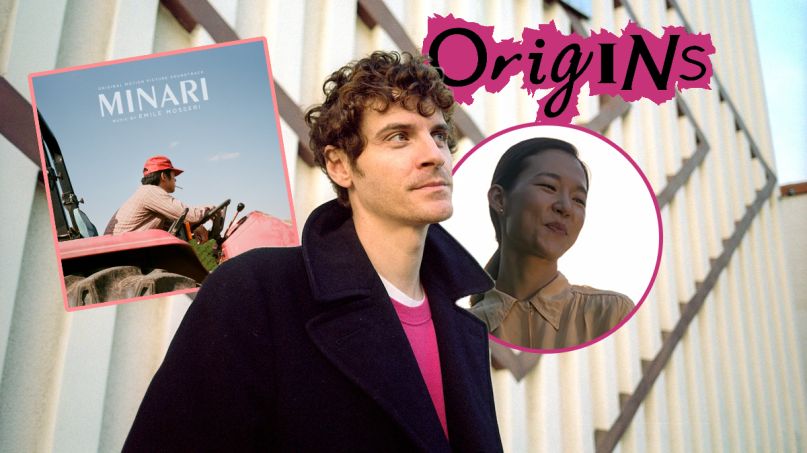 Emile Mosseri (photo via artist) and Yeri Han (A24)

In our new music feature Origins, we give musicians the chance to explore the backstory behind their latest single. Today, Emile Mosseri tells us about composing the score to Lee Isaac Chung’s Minari.

To help elevate the intimate storytelling of one of the best films of 2020, Minari, writer-director Lee Isaac Chung turned to composer Emile Mosseri. Mosseri knew well how to write the proper music for a unique family tale, as he had done recently for Miranda July’s Kajillionaire. Audiences will get to hear how he crafted a score befitting Chung’s beautiful American tale itself when Minari and its soundtrack are released wide on February 12th.

One of the reasons Mosseri was able to pen such an evocative soundtrack is because of how early he he began working on the process. In what he calls “a first for me and a dream,” Mosseri was brought in at the scripting stage, allowing him to explore the pure themes of the material as he sketched out his score.

What’s more, the composer was able to record with some of the film’s on-screen talent, namely South Korean actress Yeri Han. Han plays Monica in the movie, but she also sings on a pair of the OST’s songs: “Wind Song” and its companion piece premiering today, “Rain Song”. The tracks feature Korean lyrics, though that’s not how the Los Angeles-based Mosseri originally wrote it.

“For ‘Rain Song’, I wrote the song in English and then had Stefanie [Hong] translate the lyrics to Korean,” Mosseri explains to Consequence of Sound. “But in doing that she changed the lyrics dramatically and wrote almost an entirely new poem based on the phrasing and themes of my English lyrics. So really she’s the lyricist.”

Take a listen to Minari’s “Rain Song”, followed by the composer’s Origins of the track.

This record “Domingo” is one of my all time favorites. The melodies are so rich and powerful but are delivered with a whisper. The delicate vibe of this one was inspiring. I remember learning this one on guitar before scoring Minari. That kind of guitar sound was something I was trying to capture with the score as well. Also Gal Costa’s voice on this is so beautiful and vulnerable.

This was the first piece of music Isaac played me when we started talking about music for his film. It’s a love song that plays in the heart of the movie on an ’80s television. There’s something so haunting and beautiful about it. I was grateful to have this as a starting point. Just to have one piece of music that I knew my music would have to be able to live alongside in the film made the blank canvas a lot less daunting. It’s also gorgeous, I love the harmonies.

Luke Temple — “You Belong to Heaven”:

I always loved this song. I was lucky to tour with Luke’s band Here We Go Magic around 2010 and fell in love with his music. This song has a powerful quiet beauty to it that feels timeless but at the same time very much his own. There’s a lullaby quality to it too that feels connected to Yeri to me.

Jo Stafford — “No Other Love”:

This one is just the most classic melody. There’s something so satisfying and objectively beautiful about it but it has such a depth emotionally too. Makes me cry. It’s a perfect love song. Also the way the melody climbs in the end is so powerful and always wanted to end a song with a climbing melody like that. You don’t always get the chance, unless you’re Roy Orbison.

“Haenim” was a song that Isaac was experimenting with at one point to open the film written by this badass Korean ’70s psych artist named Kim Jung Mi. We ended up opening the movie with an instrumental version of “Rain Song” called “Big Country”. “Haenim” was another piece of music that felt spiritually connected to the film, which is always helpful. Was grateful to be able to have some small reference, to absorb that vibe, and then not listen to it for a while before writing. Also grateful that Isaac turned me on to her record. That’s one of the joys of scoring films, getting calibrated and sharing music with directors. You find some gems!