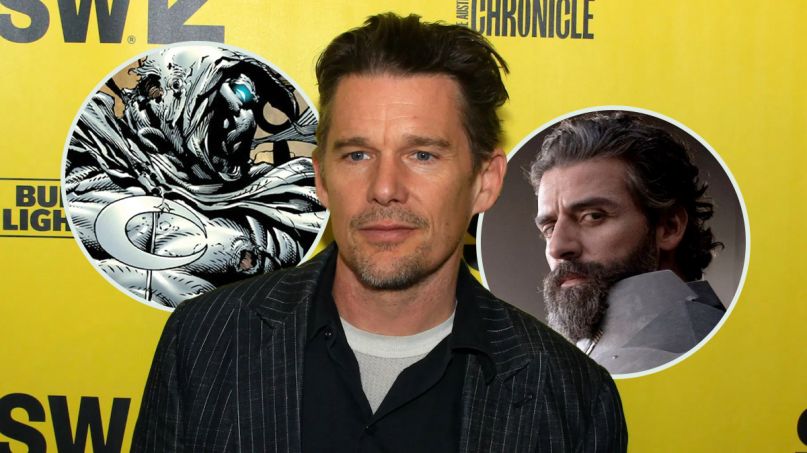 It’s Tesla vs. Poe: Ethan Hawke has been tapped to play the villain opposite Oscar Isaac in Marvel’s upcoming Disney+ series Moon Knight.

The Hollywood Reporter has it that the deal has been closed and Hawke will officially be joining the Marvel Cinematic Universe as its latest antagonist. Exactly who that will be is not yet known. Moon Knight’s archenemy is a deranged mercenary called Bushman, though the character is typically depicted as a person of color; it would be shocking if Marvel decided to whitewash a character — even a villain — in 2021 (and probably equally shocking if they called a Black character “Bushman”).

Other possibilities include Crossfire, the cousin of Ant-Man villain Darren “Yellowjacket” Cross, or Black Spectre, a vet that turns to a life of crime after experiencing the horrors of war and a deteriorating family. However, if Marvel intends to use the show as an entry point into the supernatural side of the MCU ahead of Mahershala Ali’s Blade, Hawke could end up playing Moon Knight’s first-ever enemy, Jack Russell, aka Werewolf by Night.

As for Isaac’s title character, the vigilante’s real name is Marc Spector, a wealthy ex-mercenary who pledges his life to the Egyptian moon god Khonshu in order to save his own life. In addition to Moon Knight, Spector is usually depicted as having multiple other personalities, allowing his stories to explore dissociative identity disorder and mental illness. Some incarnations have seen his superhuman powers wax and wane with the moon. (Which would make him doing battle with a werewolf an interesting proposition, no?)