Fauci: Concerts Can Return After 70% of Population Vaccinated “Some Time in the Fall”

Dr. Fauci also anticipates audiences will be required to wear masks for some time 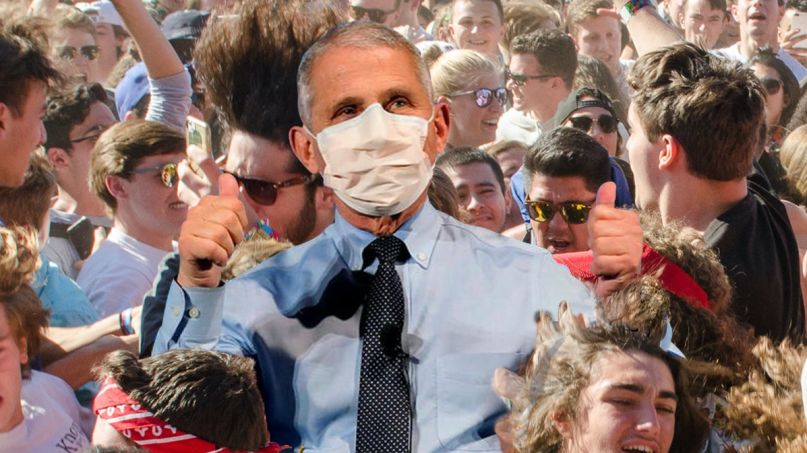 Dr. Fauci in the pit

At a virtual conference hosted by the Association of Performing Arts Professionals, Dr. Anthony Fauci said it would be safe to hold concerts, open movie theaters, and resume other live events once the US achieves herd immunity “some time in the fall.” (Via New York Times.)

The nation’s foremost expert on infectious diseases cautioned that our ability to return to normal would depend on the success of the vaccine rollout. He estimated that herd immunity would be reached when between 70-85% of the population had received the jab. “If everything goes right, this is will occur some time in the fall of 2021,” he said, “so that by the time we get to the early to mid-fall, you can have people feeling safe performing onstage as well as people in the audience.”

This news doesn’t come without caveats. Fauci expects face mask requirements to continue through autumn, and warned that only venues with excellent ventilation would be able to open. To this end, he cited a recent German study which found that safe concerts necessitated high-end air jets, reduced capacity, and mandatory N95 masks worn by the audience. He added that reopening would require more studies. “What the performing arts needs to do is to do a little bit more of what the Germans are doing,” he said.

Waiting another six months might sound bleak, but considering the problematic vaccine rollout, his assessment might actually be optimistic. Besides that, a recent Kaiser Family Foundation poll found that only 71% of Americans are willing to be inoculated, which would barely push us past the sunniest estimates of what it takes to reach herd immunity. However, Americans’ trust in the vaccine has been rising over time, so it’s not worth panicking just yet.

Fauci knows people are tired of hearing him preach caution, so he ended on an optimistic note.“We’ll be back in the theaters — performers will be performing, audiences will be enjoying it,” he said. “It will happen.”

These latest estimates of safe openings are in line with what we’ve been hearing from the start. Last April, Zeke Emanuel, director of the Healthcare Transformation Institute at the University of Pennsylvania, said live concerts wouldn’t resume until “fall 2021 at the earliest.” Since then, the performing arts have been decimated, culminating in the NIVA begging the government to save the industry from “mass collapse.” Eventually, Congress passed the $15 billion Save Our Stages Act, and while that is great news for now, there is some doubt whether that will be enough to last through the end of the pandemic.

Here at Consequence of Sound, we’re doing our part by donating a portion of all proceeds from our web store to independent venues and artists. Grab or “Protect Live Music” shirt below, and see our full collection of merch here.