Arizona death metal group wrote, recorded, and are now releasing the album amidst the pandemic 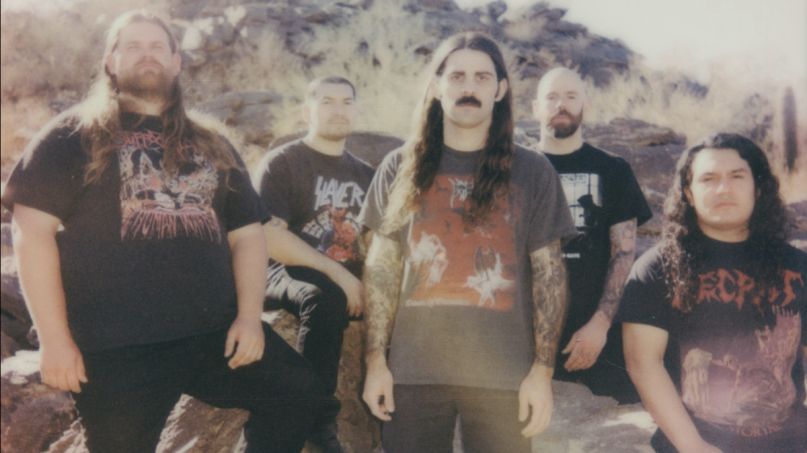 Arizona death metal group Gatecreeper have returned with the surprise release of their third proper full-length album, An Unexpected Reality.

The eight-track album was written and recorded — and now eventually released — during the pandemic. And given the record’s title, Gatecreeper didn’t have to look far for lyrical inspiration, even referencing their homestate on the topical “Superspreader”, a one-minute burst that sees the band finally embracing blast beats.

“We usually have a hard rule in Gatecreeper that we don’t have blast beats,” vocalist Chase Mason said. “But for the first side of this record we lifted that rule and ran with it.”

Inspired by the duality of Black Flag’s classic My War LP, An Unexpected Reality is split into two distinct sides. The first seven songs are short, grinding blasts inspired by Napalm Death and Terrorizer, whereas a single 11-minute track, the death-doom trudger “Emptiness”, occupies side B.

“When I was getting really into sludge and stoner metal like the Melvins and Eyehategod, they always referenced the B-side of My War,” Mason said. “Hearing bands talk about not just a record but a specific side of a record, I thought that was really cool and it always stuck with me.”

Side A finds Gatecreeper playing at their fastest speeds ever. On the new album, the mid-tempo death metal of 2019’s Deserted is largely eschewed for the far extremes of the tempo spectrum, offering a distinctively different record from the band’s past works.

“I’ve had the idea to do a record like this for a while,” Mason offers. “In 2020 we were supposed to be touring all year. Once everything got cancelled, we decided it was the perfect time to turn this idea into a reality.”

Mason adds that the band consider An Unexpected Reality a “non-album” in format and experiment in their growing discography.

“This release was an opportunity to experiment and expand on different ideas within the Gatecreeper formula,” Mason said. “It doesn’t necessarily signify a new direction for the band, but we’ll definitely have a couple new tools in our toolbox moving forward.”

Purchase An Unexpected Reality via Closed Casket Activities. Stream the full release and check out the artwork and tracklist below.