Jeopardy! Celebrated Rob Zombie’s Birthday with a Clue About the Rocker-Director: Watch 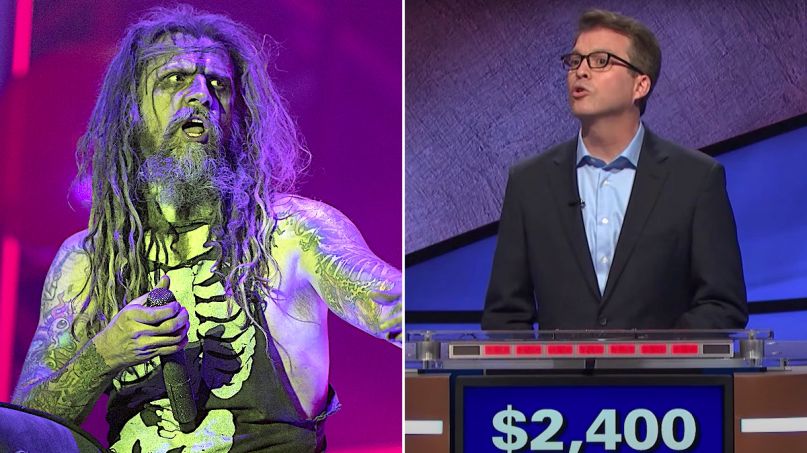 Rob Zombie turned 56 years old on Tuesday (January 12th), and he received the ultimate television honor — a mention on Jeopardy! The rocker-director was the correct response to a clue about his movie House of 1000 Corpses.

With previous champion Ken Jennings guest hosting in the wake of the legendary Alex Trebek’s tragic passing in November, last night’s new airing of Jeopardy! featured a category titled “Insane Clown Posse”. No, the category wasn’t about the face-painted rap duo or their Juggalo fans. Instead, it focused on famous clowns from horror movies and TV.

The clue was, “Hooray for Captain Spaulding, the murderous clown in House of 1000 Corpses, directed by this White Zombie frontman.” The correct $1,200 question, of course, was, “Who is Rob Zombie?”, as answered by contestant Dusty.

Zombie himself got a kick out of his inclusion in the popular TV game show, sharing a clip of the segment on his Instagram, and writing, “Hey, @jeopardy gave me a birthday shout out last night. Amazing! Pretty fucking rad. The movie that was supposed to be the end of my career just keeps on truckin’. #jeopardy #kenjennings #houseof1000corpses #robzombie.”

The Jeopardy! mention also came exactly two months before the release of Rob Zombie’s upcoming album, The Lunar Injection Kool Aid Eclipse Conspiracy, which arrives on March 12th. The LP was preceded by the single “The Triumph of King Freak (A Crypt of Preservation and Superstition)”.

Interestingly, last night’s episode of Jeopardy! included an AC/DC mention, as well. Under the category “Weather Forecast Inside”, the $400 clue was, “An AC/DC tune or a word meaning flabbergasted; You’ve been …!” Contestant Lucy correctly responded, “What is ‘Thunderstruck’?”