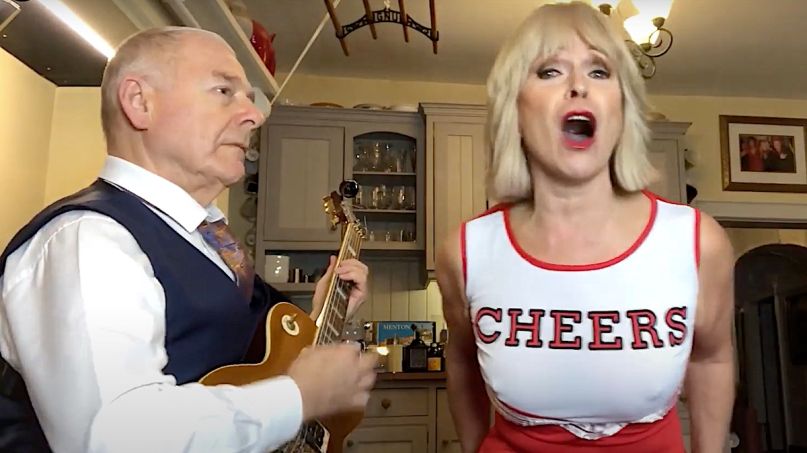 A week after going viral with an eye-catching cover of Metallica’s “Enter Sandman”, King Crimson founder Robert Fripp and his singer wife Toyah are back with an equally fun rendition of Billy Idol’s “Rebel Yell”.

The couple have been putting an eccentric spin on rock classics as part of their “Sunday Lunch” quarantine series for a few months now, but last weekend’s cover of the iconic Metallica tune completely blew up, garnering nearly 3 million views to date. Judging by the pun-filled comments on YouTube and social media, it was Toyah’s revealing choice of attire that made the clip a whopping sensation, even more so than the quirkiness of her singing the iconic metal song while riding an exercise bike.

Now, the playful pair take on Billy Idol’s sing-along anthem “Rebel Yell”, with Toyah dressing and acting the part of a cheerleader, complete with pom poms. While singing the song, the 62-year-old Toyah pulls off some impressive cheerleader jumps, as Fripp accompanies her on guitar.

At the beginning of the new video, the couple acknowledges the success of the Metallica clip, with the cheeky line, “Last week, you ‘racked’ up over 2.7 million views.” If the reaction is any similar to the Metallica video — and we’re guessing it will be — this one should have viewers crying “more, more, more,” as well.

If you find yourself a fan of Robert and Toyah’s recent performances, go back and see their rendition of Black Sabbath’s “Paranoid”, featuring Toyah singing and dancing in a prison cell, as well as covers of songs by Nirvana, Alice Cooper, Guns N’ Roses, and Sex Pistols.

Watch their take on Billy Idol’s “Rebel Yell” below.

Editor’s Note: Join us in the fight to protect live music by picking up our new original shirt. 50% of net proceeds go towards independent music venues in their recovery efforts.

Previous Story
Song of the Week: Danny L Harle Urges Us to Dance and Heal with “On a Mountain”
Next Story
Phil Spector Dead at 81 From COVID-19
Popular
More Stories
[fu-upload-form form_layout="media" title="Submit Your Photo"][input type="hidden" name="ugc" value="1"][/fu-upload-form]