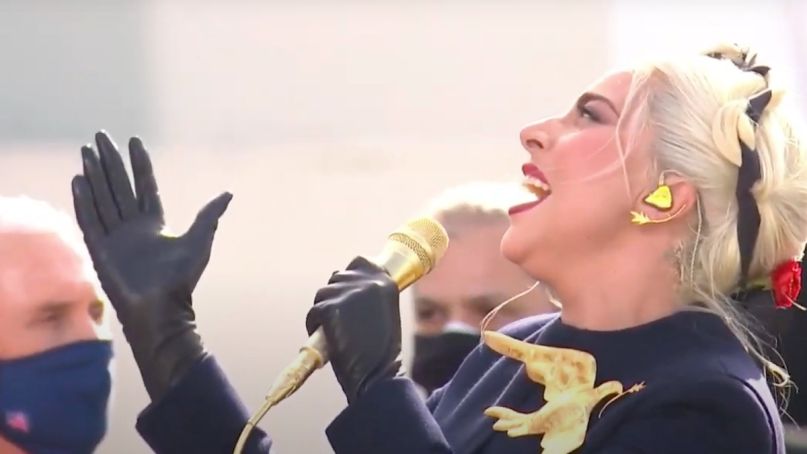 To help kick off the swearing-in of President Joe Biden and Vice President-Elect Kamala Harris and the healing their inauguration represents, Lady Gaga performed the National Anthem on the west front of the US Capitol building.

We knew to expect a dramatic presentation, and Gaga delivered — into a golden microphone, no less. Yet for all the flair, it was also powerful, both in the performance and in its contrast to the drama that occurred in the same spot just two weeks ago. Gaga singing “The Star-Spangled Banner” to welcome the incoming president right where insurrectionists stormed the Capitol in objection the same man’s election just two weeks ago is a powerful historical image. It’s a moment that deserved a voice like the pop star’s and she delivered in — well, in stars and stripes. Watch below.

Lady Gaga’s rendition of the Anthem is a culmination of her long-standing support for Biden and Harris, which saw her stumping and performing at an election-eve rally. Further performances taking place during the inauguration celebration include Jennifer Lopez and Garth Brooks. The New Radicals will reunite to perform “You Get What You Give” at the inauguration parade, which will also see an appearance from skateboarding TikTok hero Nathan Apodaca.

At 8:30 p.m. ET, the 90-minute TV special Celebrating America will air with host Tom Hanks and performances from Bruce Springsteen, Foo Fighters, Justin Timberlake, Demi Lovato, and others. This past Sunday, Fall Out Boy, Carole King, James Taylor, Will.i.am, Ben Harper, and AJR played the We the People Concert special.