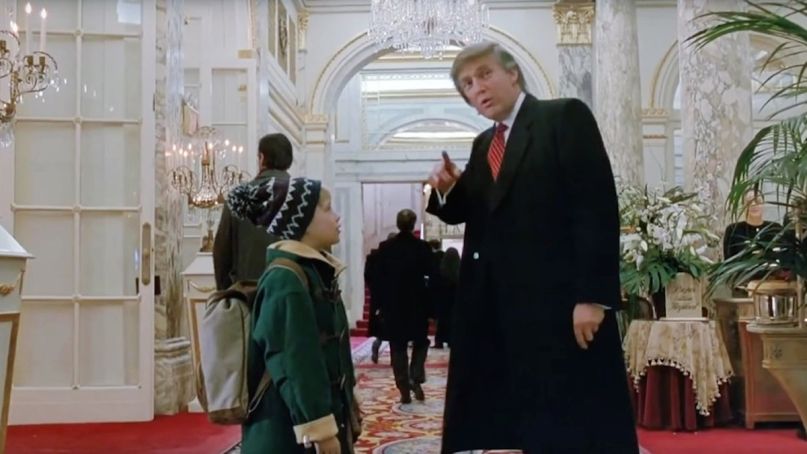 Donald Trump has been successfully voted out of the White House, and movers have already been spotted ahead of his last day in office on January 20th. Now, fans are hoping to remove Trump from another famed American institution: Home Alone 2: Lost in New York — and the campaign has the approval of the film’s own Macaulay Culkin.

Ever since the deadly Capitol insurrection last week, incited by 45 himself, Trump detractors and Home Alone 2 lovers alike have called for the erasure of Trump’s cameo in the 1992 movie. If you’ll recall, the businessman-turned-politician turns up in the lobby of the Plaza Hotel and gives Culkin’s Kevin McCallister character directions.

Fans have come up with many hilarious ways to replace Trump in the film; some of my personal favorites involve Dolly Parton and Jabba the Hutt. Yesterday, January 13th, Culkin joined in on the fun, cosigning two fan suggestions.

The actor said he was “sold” on one Twitter user’s idea to digitally replace Trump with a 40-year-old version of Culkin. He also replied “bravo” to another person’s edit of the scene, which rendered Trump entirely invisible. (Imagine if we could have done this the last four years?)

With Trump on his way out of the Nation’s Capital — and twice impeached, don’t forget it — removing his Home Alone 2 cameo doesn’t seem all that farfetched of an idea. Director Chris Columbus probably wouldn’t mind either; in an interview with Insider last month, he revealed that Trump “did bully his way into the movie” in exchange for allowing filming to take place at the Trump-owned Plaza Hotel.

Home Alone 2 has actually aired without Trump’s face in it, but it wasn’t because of political reasons. Recently, Canadian broadcaster CBC cut his cameo out due to time constraints. “These edits were done in 2014 when we first acquired the film and before Mr. Trump was elected president,” CBC said in reply to backlash. Naturally, the Orange Loudmouth had something to say about it.

Scroll on below to see some top-notch Trump replacement ideas.

NOW digitally replace the Home Alone 2 cameo with one of Dolly Parton 🙌🏻 pic.twitter.com/T1ATVSxfkC

I can’t believe they were able to get George Lucas’ team to remove him in the Home Alone 2 special edition. pic.twitter.com/SzLbNjh9y3

Not only should we digitally remove Donald Trump from Home Alone 2, we should replace him with adult Macaulay Culkin. Just make that plot go off the rails. pic.twitter.com/r4mObFZC37

I call on Congress to immediately order that Donald Trump be digitally replaced in all versions of "Home Alone 2" with … Gritty. I want my children to see someone they can look up too.

(Surely there is also something in the 25th Amendment that makes provision for this?) pic.twitter.com/ooXCPG4L9u

If you’re both a Home Alone nerd and proud mask-wearer, head over to the Consequence Store to pick yourself up a novelty face mask that’ll make you say, “Merry Christmas, ya filthy animal!” A portion of all proceeds will go to supporting independent artists through the MusiCares’ COVID-19 Artist Relief Fund.