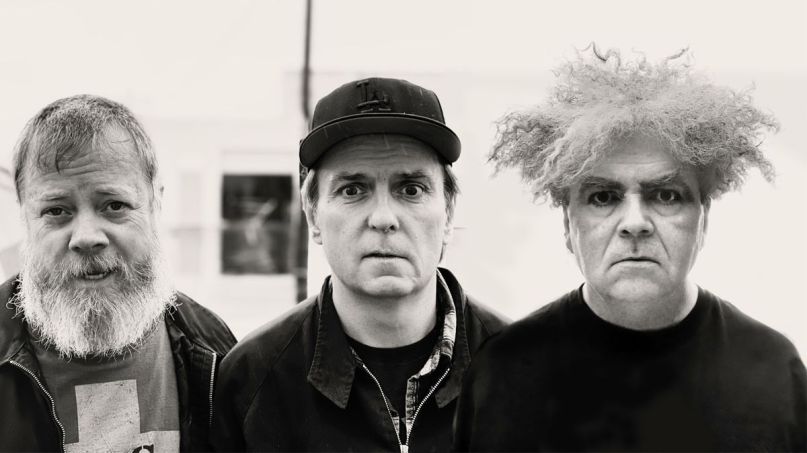 The Melvins have shared the riff-filled “Caddy Daddy” from their upcoming album Working with God, out February 26th. The album sees the re-formation of the band’s 1983 lineup featuring Buzz Osborne, Dale Crover, and original drummer Mike Dillard.

Given the young ages of the band members when they formed the Melvins, some teenage sense of humor in the new track is inevitable. These aren’t archival recordings, but new music from the 1983 lineup, in the vein of their previous full-length album, 2013’s Tres Cabrones.

Like lead single “I F**k Around”, which crudely debauches The Beach Boys’ “I Get Around”, the new single, “Caddy Daddy”, boasts a similar irreverence both lyrically and musically. If it’s any indication of what to expect from the rest of Working with God, fans can look forward to a heavy and sludgy album.

While the band’s 1983 roster prepares to release the new LP, the Melvins’ standard touring lineup (frontman Osborne; Crover on drums; Steven McDonald of Redd Kross on bass) rang in the New Year with a livestream concert. Indeed, the band has a big year ahead.

In addition to Working with God, Crover is releasing his sophomore solo effort, Rat-A-Tat-Tat!, on January 15th. This follows Osborne’s recent acoustic solo offering, Gift of Sacrifice, recorded with Mr. Bungle’s Trevor Dunn and released in 2020. To top it off, the Melvins are also reissuing their 1987’s Gluey Porch Treatments and 2002’s Hostile Ambient Takeover, returning the sought-after albums to print.

Pre-order Working with God via Bandcamp and Amazon. Listen to “Caddy Daddy” below.