A rundown of the best underground metal releases of January 2021 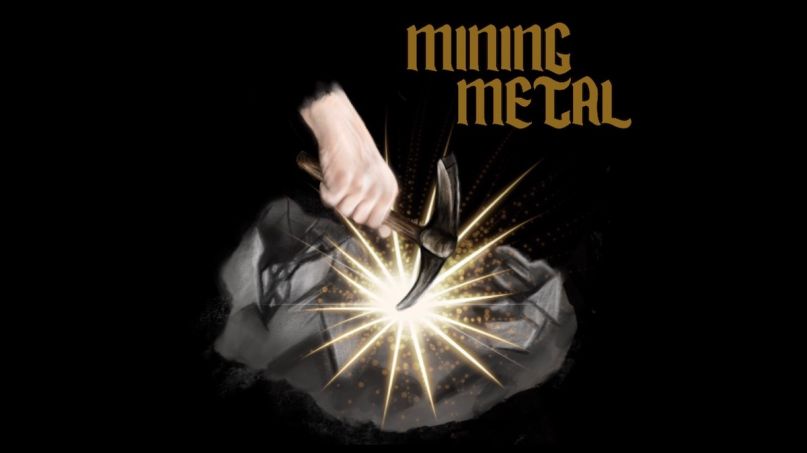 In a break from our almost uniformly pessimistic preambles in 2020, the first Mining Metal of the month finds us in an ever so slightly optimistic mood. Maybe it’s the relief of waking up and not being bombarded by terrifying headlines (though, of course, things could be much better). Then again, maybe it’s just the knowledge that spring, warmer weather, and clearer skies are coming, even if they aren’t quite here yet.

Or maybe it’s just that the 2021’s barely started and already there’s too much good metal to fit in this column. January tends to be a bit of a desert as far as new music goes, but less than four weeks into the year we’ve received daring surprise releases (below), genre-bending devotional pieces (Portrayal of Guilt), stunning debuts (Frozen Soul) and what feels like a mid-career game-changer (Tribulation).

Mining Metal tends to focus on somewhat lower-profile releases than those last two bands mentioned, which come courtesy of legacy labels Metal Blade and Century Media respectively, but that such excellent and oppositional fare is getting play with such seasoned professionals only proves again that the underground is thriving, against all odds. If January is any indication, it’s going to be a great year for metal. – Joseph Schafer

For readers disinclined toward looking up the Greek and Latin roots of made-up words, I did a little legwork – a “Xenolich” is an undead alien entity whose soul is contained in a physical object outside of its body. Less literally, it signifies an imaginative fusion of the eldritch and the extraterrestrial, at the border of the science fiction and horror genres; the same space that Black Hole deity’s music occupies. Furious double bass and ultra-low guitar tones pledge allegiance to brutal death metal forebears in the vein of Cannibal Corpse and Hate Eternal, but crisp production and highly melodic leads draw from the technical “deep space” side of the genre, as well. Both of those approaches tend to produce a whole lot of chaff and not a ton of wheat, but Lair of the Xenolith is practically multigrain bread – a few bites of the EP will sustain anyone on their long voyage into dark matter. Buy it on Bandcamp when it’s released on February 5th. – Joseph Schafer

Yes, the band may have come to prominence for many for their truly stupendously long single-word band name (which we have spared you of, thank you), but that spectacle masked some truly thoughtful and mood-driven technical death metal pieces. They’ve clearly spent the past few years brushing up on how groups like Melechesh and Nile develop rich and deep moods within a highly technical and brutal framework. Their already sharp compositions on take a step toward more explicit melodicism and atmosphere, aided by a steep upgrade in production and mixing quality. I laud any group that steps out from behind a gimmick to deliver the goods in this capacity; the spectacle of their previous lengthy titles being pushed aside has revealed some truly catching death metal that feels resolutely modern and deeply accomplished. Buy it on Bandcamp. – Langdon Hickman

There is a tightness and machine-honed capacity to Fractal Generator’s approach to death metal that I find tremendously fascinating here. It picks up on an interesting intersection of groups like Car Bomb, Meshuggah and Ulcerate, where the intent is to evoke sonic imagery of trans-dimensional machines, almost like an alternate universe’s approach to industrial metal where it is death metal meant to invoke the sounds and images of industry as opposed to the inverse. There is a tremendous technical capacity displayed here, but it is one that is highly directed, creating vast near-Devin Townsend levels of thematic development rather than just being endless quantized sweeps. Technical death metal is a dirty word and sometimes for valid reasons, but when it is wielded as a means towards an end like it is here, it pays for all those sins and more. Buy it on Bandcamp. – Langdon Hickman

The first major underground metal release of 2021 came as a surprise. Arizona death metal revivalists Gatecreeper gave no hints that a new record was en-route, though it’s safe to assume that this year will yield many more releases like it: written and recorded while in the depths of COVID-19 lockdown. The harsh circumstances around its creation give the release an odd balance of urgent messaging and breezy feeling, An Unexpected Reality contains mostly grindcore-oriented songs clocking in under a minute each. Calling it a “full length” album seems like a tiny stretch, but the band’s sophomore LP was at times a bit much to digest, so this surprise attack makes for a nice change of pace. And for those looking for something meatier, the record closes with a slow ten-plus minute tune that plays with gothic melancholy and pop melodicism – it’s unquestionably the best song in their catalog, one likely to be a set closer once Gatecreeper can return to the stage safely. Buy it on Bandcamp. – Joseph Schafer

Molten’s debut emerges sonically from that magical brew of traditional heavy metal and the breaking point of thrash where historically it eventually splintered into death metal and black metal. They wisely refuse to settle the question of where precisely on that axis they fall, teetering back and forth between the various shards of historical heavy metal they play with in a way that feels just like those first few spins of early Bathory, Mercyful Fate or Venom. The group likewise rides a fine line, having as many gentle flourishes of progressive and technical approaches as deliberately primitive and sloppy approaches, balanced in a way that reads as clearly deliberate, not unlike current work from Dark Throne but with more death and thrash presence. There is a perennial power to that undifferentiated trad/extreme metal hybrid, one that Molten wields to exciting results. Buy it on Bandcamp. – Langdon Hickman

Mefitis play a densely executed approach to progressive extreme metal, wielding progressive rock influence more the way that heavy metal bands of the ’70s and ’80s did rather than the post-Dream Theater boom. These songs are replete with tons of twists and turns, strange creeping melodies and astute changes but nary an endless solo in sight. The group also displays a number of different models of progressive metal across the span of the record, at times erring closer to Voivod or Gorguts, other times lurking in ambitious shapes of early black metal as those players reached toward the same grandiose shapes that Mercyful Fate before them had wielded. Best of all, the group comes across as endlessly bursting with ideas, like a perpetually blooming flower. Fly straight, Mefitis, and this could be the start of big things for you, not unlike Tribulation’s gallop into the limelight. Buy it on Bandcamp. – Langdon Hickman

Mother of Graves – In Somber Dreams

Take this entry as a little bit of a twofer – and also a mea culpa. Mother of Graves play doomed-out death metal that moves at a crawl and pummels the listener with leaden tone and battle-axe riffs. At the same time, though, they’re adept at sweet melodies that never rely on too many notes (or note choices). If any readers can’t get enough of that final Gatecreeper song, this is a great place to get a similar fix. It isn’t exactly a new formula, but it’s a tough one to accomplish—too many bands stretch these songs on for entirely too long. Mother of Graves smartly keep their selections under six minutes long for easy digestion. Special accolades go to vocalist Brandon Howe, who’s most well-known as a drummer – his band Obscene released an excellent debut album last year which would have merited inclusion in the column if yours truly had listened to it sooner. Sorry, Brandon. As for In Somber Dreams, buy it on Bandcamp. – Joseph Schafer

Metal gods bless Matt Harvey; the storied Bay-Area axeman’s shredded for legendary acts like grindcore innovators Repulsion and thrash OG’s Exodus, not to mention his ongoing excellence in death metal horror hounds Exhumed (as well as too many other projects to name). Part of Harvey’s success in those groups has always been an ear for melody, which comes into full bloom in his traditional metal project, Pounder. For three years, the band has served as Harvey’s outlet for unabashed pop-metal in the vein of Angel Witch or Dimaong Head, albeit tempered by his husky singing voice. The band’s debut, Uncivilized, showed great promise but didn’t quite hold my attention for its full runtime. Follow-up Breaking the World feels more immediate and satisfying – though it’s composed in part of material written before its predecessor. Buy it on Bandcamp when it’s released on January 29th. – Joseph Schafer