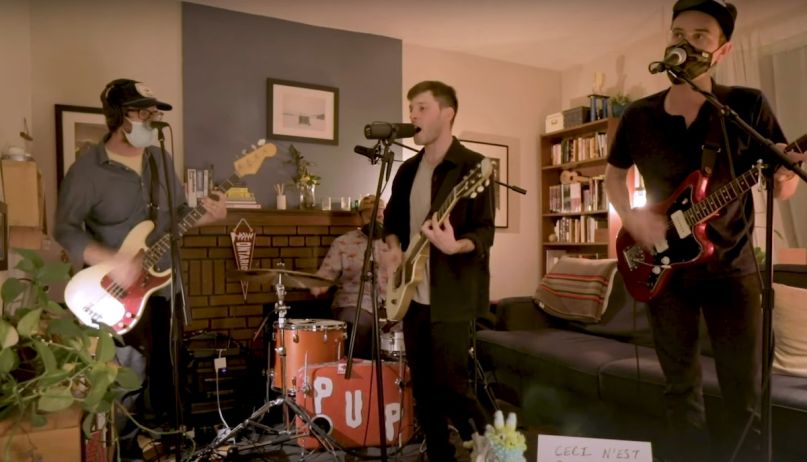 The holidays sounded a bit for rough for PUP, who released a single called “It’s Christmas and I Fucking Miss You” in collaboration with Charly Bliss. The punk rockers seem to be on the mend, though, as they’ve just recorded a boisterous 17-minute Tiny Desk (Home) Concert for NPR.

For the gig, PUP really went home… as in frontman Stefan Babcock’s actual apartment in Toronto. The four-piece dished out four songs altogether — “Rot”, “Kids”, “Reservoir”, and “Scorpion Hill” — from his cozy living room, surrounded by books, plants, candles, and framed artwork. The room wasn’t exactly a tiny space; but there were certainly very limited options for movement and moshing, a.k.a. it was pretty much like playing the regular, pre-pandemic version of NPR’s video series.

Hopefully Babcock’s fellow apartment tenants weren’t too bothered by all the (good) noise that day. Over on social media, the band wrote, “Sincerest apologies to his upstairs and downstairs neighbors!!”

Replay the entire performance below. PUP dropped their This Place Sucks Ass EP (on which “Rot” appears) this past October.

🏡 @puptheband refused to dial down the volume for its Tiny Desk (home) concert, filmed from a neatly-furnished living room complete with an Ontario pennant. https://t.co/YiL9Q9xUQa

We were honoured to record a @nprmusic Tiny Desk live from Stefan’s apartment. Sincerest apologies to his upstairs and downstairs neighbours!!

Be safe, take care of each other, wear a mask!https://t.co/d0hNabSbdy pic.twitter.com/5KPKDu5U8T