"I brought Borat out because of Trump. There was a purpose to this movie, and I don’t really see the purpose to doing it again" 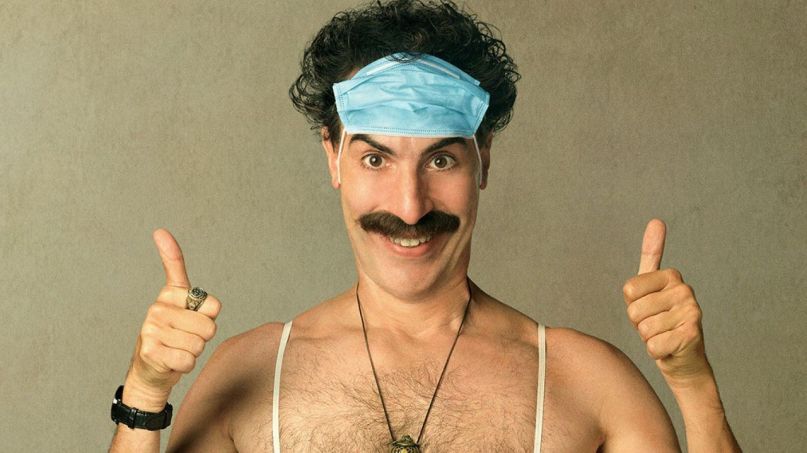 The saga of Borat Margaret Sagdiyev has come to a very nice end. In a new profile in Variety, Sacha Baron Cohen said he’s finished with his most famous creation, and that the fictional Kazakh journalist is now “locked away in the cupboard.”

The character had been retired once before, after the release of the 2006 film Borat: Cultural Learnings of America for Make Benefit Glorious Nation of Kazakhstan. The satire of Borat is based in surprise. People thought they were talking to a second-rate journalist from a sparsely populated country, and so they didn’t mind sharing their racism, misogyny, and anti-Semitism. After the movie became a box office sensation, Cohen thought he’d lost the element of surprise.

He began to change his mind in 2018. First, the rise of white nationalism and Donald Trump inspired his Showtime series Who Is America?, and then in an appearance on Jimmy Kimmel Live!, Cohen dusted off Borat in an apparent attempt to “swing the midterms for Premier Trump.” He went door to door in Westlake Village in Los Angeles, and discovered that many people didn’t recognize the trademark rumpled suit and handlebar mustache. Armed with this knowledge, Cohen turned his attention to the 2020 presidential election.

Cohen said he wanted to make a movie that revealed America’s “dangerous slide to authoritarianism.” That project became Borat Subsequent Moviefilm: Delivery of Prodigious Bribe to American Regime For Make Benefit Once Glorious Nation of Kazakhstan. As he told Variety, “I felt democracy was in peril, I felt people’s lives were in peril and I felt compelled to finish the movie.“ He added, “The movie was originally about the danger of Trump and Trumpism. What coronavirus demonstrated was that there’s a lethal effect to his spreading of lies and conspiracy theories.”

Borat Subsequent Moviefilm became on of the first works of art to tackle the COVID crisis, with an in-character Cohen interviewing Trump supporting conspiracy theorists. It also presented plenty of problems, both logistical (while filming in Romania, Cohen was exposed to the virus and had to be flown to Los Angeles) and moral. The Borat team was determined to get Rudy Giuliani on camera, but he was refusing to practice basic COVID-19 safety.

“There was this debate of what do we do?” Baron Cohen recalled. “Do we go ahead with this scene? What happens if he has coronavirus? We concluded that it was worth the risk.”

The result is one of the most indelible moments in recent film history. Giuliani, the President’s lawyer and arguably one of the most powerful men in the country, attempted to engage in “sexy-time” with Borat’s daughter, laying down on a bed and reaching into his pants before being interrupted. It isn’t a stretch to say that the moment impacted the course of American democracy. After the election, as Giuliani worked to overturn the results, he was dogged by questions about his behavior. At the very least, Borat Subsequent Moviefilm made it much harder for Giuliani to stay on message.

“I don’t want to egotistically imply that people would watch Borat and not vote for Trump, but that was the aim,” Cohen said, explaining that his goal “was how do we get as many people as possible to watch this before Nov. 3?”

But now that the election is past and efforts to steal it have stalled, Cohen is once again ready to move on. “I brought Borat out because of Trump,” he said. “There was a purpose to this movie, and I don’t really see the purpose to doing it again. So yeah, he’s locked away in the cupboard.”

Borat may be gone for now, but he won’t be forgotten soon. The real-life country of Kazakhstan has embraced their most famous fictional son, changing their tourism slogan to “Very Nice!” Meanwhile, Cohen is continuing his crusade against Facebook and developing his acting career; he recently appeared in the award-season drama The Trial of the Chicago 7.