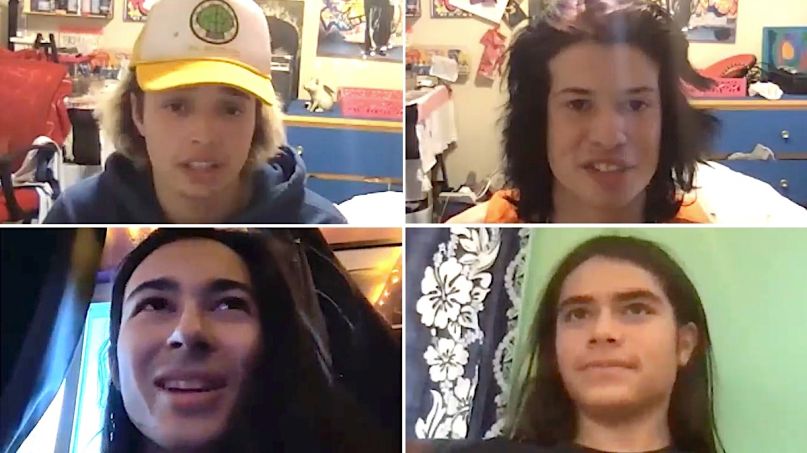 The new band Suspect208, featuring the sons of famous rock stars, are looking for a new singer, just a couple months after making a splash with their debut single. The band has parted ways with Noah Weiland, son of late Stone Temple Pilots singer Scott Weiland, citing a “dark path of drug use” and erratic behavior among the reasons.

Suspect208, which also features drummer London Hudson (son of Slash), bassist Tye Trujillo (son of Metallica’s Robert Trujillo), and guitarist Niko Tsangaris, arrived like a house on fire with their first single, the hard-rocking “Long Awaited”. A combination of curiosity and a strong musical debut propelled the track to nearly 1 million listens on YouTube. The released another single, the poppier “All Black”, in December.

Early on Friday (January 8th), the band shared a wanted ad, reading, “Suspect208. Singer Wanted. Requirements: Age 18 to 24, Must live in LA. To submit your audition: DM us your cover of ‘Black Dog’ by Led Zeppelin. List 3 musical influences.”

They followed that up later in the day with a full explanation of the decision to move on without Noah:

“As many of you know, we let our singer, Noah, go. We were really close to him and it is the last thing we would’ve ever wanted to do, but it had to be done for his safety, as well as the longevity of the band. This decision was made by the band because it was the last thing we could do to keep going. Noah was not writing lyrics or lifting his weight in the band for two months before we let him go. He was heading down a dark path of drug use that got in the way of our friendship as well as the band. Lastly, there were many instances of blow-ups over very small issues we’d confront him with. We wish him the best, and we deeply care about him. However, we did as much as we could to help him. Thank you to those who stick with us on this journey, we are very grateful.’

This is the last thing we would’ve wanted to post. But we had to clear up the misconceptions and tell people the real reasons behind this decision. Please don’t message Noah any hate or any negativity.”

We actually spoke with all four members of Suspect208 via video Zoom last month, while Weiland was still in the band. They talked about their fathers’ legacies, with Noah saying he was actually a bigger fan of hip-hop and R&B than rock ‘n’ roll.

This story was updated with the full statement from Suspect208 regarding the decision to part ways with Noah Weiland.