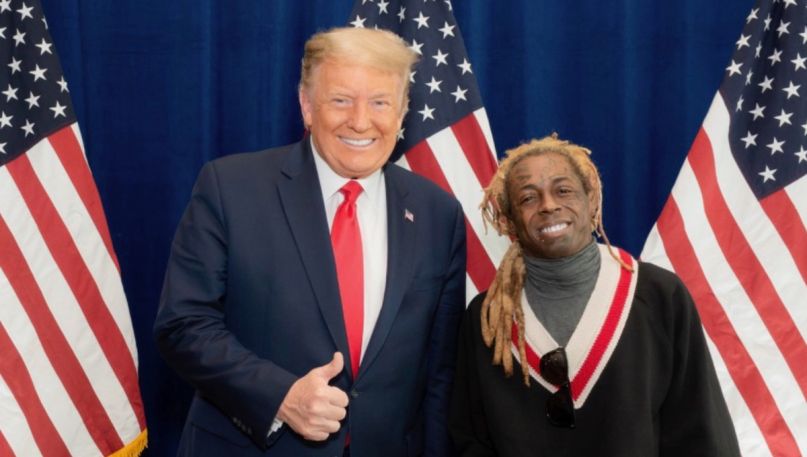 With just hours to go before his official exit from the White House, Donald Trump has announced a long list of pardons. Among them: rapper and friend Lil Wayne.

Tha Carter V rapper recently pleaded guilty to a federal weapons charge stemming from a 2019 incident in which he was found with a firearm on his private jet. Thanks to Trump’s pardon, Wayne no longer faces the threat of a 10-year prison sentence.

Trump and Lil Wayne’s courtship traces back to October, when the two met up and posed for a photo-op. The hip-hop artist then publicly endorsed the Orange Man in Chief, praising him for his supposed progress with criminal reform initiatives.

“Just had a great meeting with @realdonaldtrump @potus besides what he’s done so far with criminal reform, the platinum plan is going to give the community real ownership,” Lil Wayne wrote on Twitter. “He listened to what we had to say today and assured he will and can get it done.”

“[Lil Wayne] has exhibited this generosity through commitment to a variety of charities, including donations to research hospitals and a host of foodbanks,” reads the pardon. It also notes that former NFL player Deion Sanders personally petitioned for Wayne’s pardon.

Trump has also commuted the sentence of Kodak Black, who had been serving 46 months for forging paperwork to obtain a firearm.

“Before his conviction and after reaching success as a recording artist, Kodak Black became deeply involved in numerous philanthropic efforts,” reads the commutation. “In fact, he has committed to supporting a variety of charitable efforts, such as providing educational resources to students and families of fallen law enforcement officers and the underprivileged. In addition to these efforts, he has paid for the notebooks of school children, provided funding and supplies to daycare centers, provided food for the hungry, and annually provides for underprivileged children during Christmas.”

It remains to be seen whether Trump issues any more celebrity pardons before Wednesday at Noon, but Joe Exotic is certainly crossing his fingers.

Just had a great meeting with @realdonaldtrump @potus besides what he’s done so far with criminal reform, the platinum plan is going to give the community real ownership. He listened to what we had to say today and assured he will and can get it done. 🤙🏾 pic.twitter.com/Q9c5k1yMWf