Netflix’s Night Stalker: The Hunt For a Serial Killer Pulls Its Punches: Review 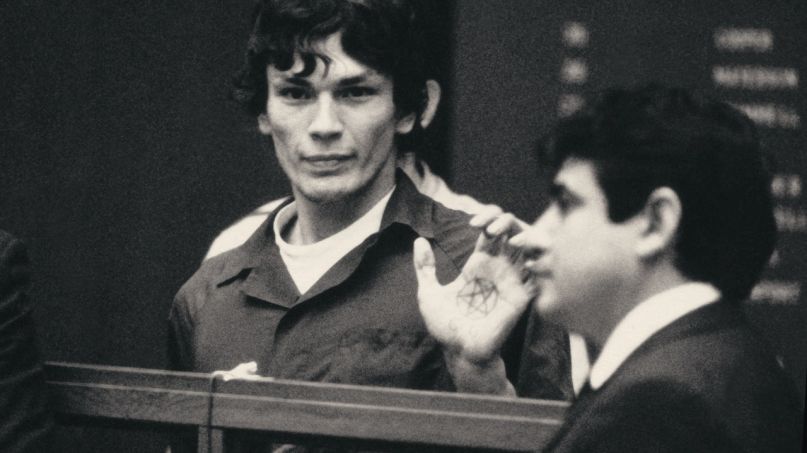 The Pitch: Richard Ramirez, aka The Night Stalker, terrorized California for 167 days from 1984 to 1985 with a seemingly random string of home invasions, rapes, and murders. Netflix’s new true crime docuseries Night Stalker: The Hunt For a Serial Killer chronicles his crimes and the investigation leading to his arrest and conviction.

As the name states, this is a story about tracking a murderer rather than the murderer himself and director Tiller Russell focuses on the humanity of the investigators to varying degrees of success. These are atrocious crimes and a consistent effort to give a voice to the victims keeps the series from veering into exploitation.

However, telling the story through this narrow lens ultimately results in a one-sided narrative that fails to interrogate it’s motive.

The Detectives: Night Stalker centers its story on LAPD detectives Gil Carrillo, a young homicide detective eager to prove himself, and Frank Salerno, a veteran drawing on his experiences tracking the notorious Hillside Strangler. Carrillo and Salerno are the two most directly responsible for bringing Ramirez to justice and the lens through which the story unfolds. It’s an interesting narrative choice amidst the ongoing movement to defund the police, but Russell presents the detectives as earnest and sincerely interested in protecting the public — often at the expense of their own lives.

Witnessing first hand the trauma and tragedy left in the wake of the Night Stalker’s crimes, they became secondary victims, working around the clock and dealing with the inability to simultaneously hunt the killer and protect their own families. It’s an important look at the mental toll of bearing witness to extreme brutality and attempting to enter a depraved mind. However, this pain is often presented as equal to that of the victims who actually experienced these crimes, leading to uncomfortable tonal shifts and misplaced empathy.

Choosing to tell the story from the perspective of the investigators also leads to pervasive law enforcement ideology. The guilt-inducing desire for a new crime bringing fresh clues and the annoyance with members of the media are understandable, if occasionally off-putting. More problematic is another detective’s admission of using violent tactics to get the name of a suspect. Yes, this is the reality of the case, but by so firmly centering the lens on the two detectives, we lose any counterpoint or interrogation of the ethical ramifications.

The Victims: Night Stalker is at its best when the docuseries allows survivors of Ramirez’s crimes and family members of the victims to tell their stories. Each of their experiences is told in heartbreaking detail, adding humanity to the horrific details.

Russell never forgets that each victim was a real person — rather than a character in a salacious story — and reveals this collateral damage through harrowing accounts retold by either survivors or living members of their family.

Particularly moving is the story of Anastasia Hronas, who was kidnapped and assaulted by Ramirez at the age of six. She appears in the series and bravely describes the attack, showing that she has continued to live her life rather than allowing Ramirez’s despicable acts to be the final word in her story.

The Perspective: Given the breadth and scope of these crimes, Night Stalker often misses opportunities to make a larger statement about the impact they had on the community. In the opening moments, we’re told that there are two different sides to LA: the glitz and glamour of Hollywood, and the darker, seedier side of the city. It’s an intriguing premise given the random nature of Ramirez’s crimes, but we’re never given more information on how these differing communities were affected. This feels especially absent considering a community of neighbors was directly responsible for his arrest. Though the chase and apprehension are presented in breathless detail, the celebration doesn’t feel especially earned because there has been little attempt to explore the divided city or the unifying nature of collective fear.

The inclusion of the news media and interviews with journalists add some of this context, but reporters are often maligned for the frustrating ways they thwarted the investigation rather than as a lens through which the community responded. And similar to the detectives, their pain at witnessing testimony of these events is depicted as equally traumatic to that of the victims. What’s truly off-putting is a journalist’s description of being awoken in the middle of the night by her cat in comparison to court testimony from a mother describing the murder of her husband, assault of her child, and rape at gunpoint. It’s a jarring moment of displaced empathy, pointing to larger problems with the narrative. The pain of witnessing crime is valid and an integral part of documenting atrocities but the perspective often seems to present investigators and journalists as the primary victims.

The Killer: Ramirez himself remains in the shadows for the majority of the series and Russell wisely focuses on the terror he caused rather than the man who caused it. However, there is no attempt to understand his motives or the random nature of his crimes. This is likely to avoid over-sympathizing with a killer, but in failing to interrogate the reasons behind his actions, Russell inadvertently presents Ramirez as the satanic boogeyman he was trying to avoid.

Much is made about the tricky nature of his crimes because they exist outside of a regular pattern with little consistency, but there’s no attempt to explain this phenomenon. We’re told that he worshipped Satan and that his crimes were reminiscent of Charles Manson, but not whether this was an honest belief or an attempt to capitalize on the satanic panic of the ’80s with salacious copycat crimes. We see his sex appeal and fascinating persona on display during his trial, but his groupies are referred to as “dumb bitches” with no counter argument as to what would lead someone to idolize a monster.

In hindsight, Russell was likely trying to avoid making Ramirez the focus of the series, choosing instead to center his victims and survivors, but by not interrogating the intent behind these crimes, we miss valuable context that would give purpose to recounting tremendous pain.

The Verdict: In the wake of BLM protests, our cultural obsession with true crime has reached a necessary reevaluation. While Night Stalker does many things well, namely its insistence on presenting the victims with compassion, the docuseries fails to answer the question, “Why?” What was Ramirez’s motive and how can we use this knowledge to prevent future crimes? What lessons can we take from community involvement in policing from this story and use it to make our neighborhoods safer? What is the purpose of telling this horrendous story if not to make a statement about it that can be used going forward?

The takeaway here seems to be that investigating horrendous crime is damaging to the investigators, and that is a story worth telling, but it’s only one part of the overall picture. By not presenting the full context, Night Stalker inadvertently exploits the victims it seeks to humanize. In the final episode, a victim’s family member describes realizing she is sitting next to a “fan” of the man who murdered her grandmother. This devastating moment reveals larger truths about true crime in general. Because really, without a guiding answer to the “Why” of it all, aren’t we also just fans?

Where’s It Streaming? Crack open the case files on January 13th via Netflix.