Search Party Season 4 Finds New Levels of Darkness That Aren’t for Everyone: Review 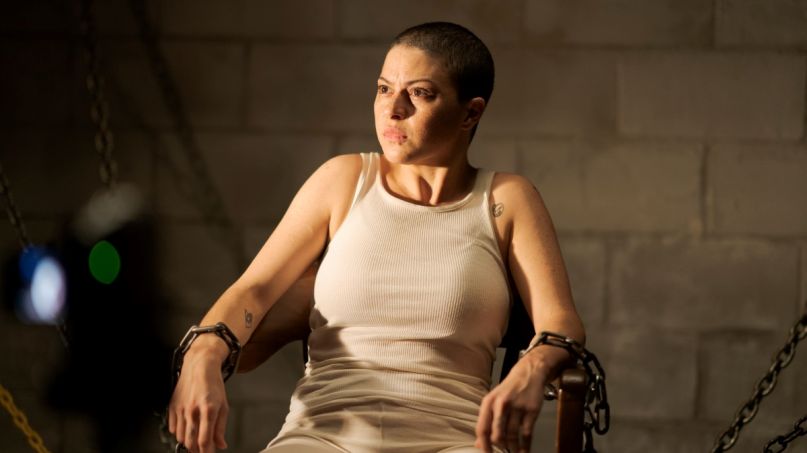 The Pitch: The search continues. Sarah-Violet Bliss, Charles Rogers, and Michael Showalter’s darkly comic cult favorite Search Party returns for a fourth round, this time with the script flipped. After three seasons of wading into the murky waters of crime, punishment, and hipster incompetence, the enigmatic and eerie-eyed Dory (Ali Shawkat) is this season’s search subject.

Dory is kidnapped by a twiggy fan named Chip (Cole Escola) and locked in a felt nightmare basement made to deliberately resemble her old NYC apartment. Dory, fresh from beating a murder rap in Season 3, finds herself the victim of her growing fanbase. (For those seeking a refresh: the murder was accidental, but celebrity twisted Dory’s psyche, making her a survivalist in her own mind and a sort of dark queen to the press.)

Chip, however, wants to be best friends, envisioning a sort of maternal bond achieved through torture, wigs, Pavlovian brainwashing, and peanut oil-cooked chicken nuggies. Once again, this is dark comedy as it ever was – although this season pushes the show to extremely tough, uncomfortable places with this particular through-line. Helsinki syndrome for the twee kids, or something like that.

And with that in mind, Search Party once again asks its young adventurers, Drew (John Reynolds), Portia (Meredith Hagner), and Elliot (John Early), to take on adult situations for which they are thoroughly and stylishly underprepared.

Who-Dumb-It? Search Party’s secret weapon has always been its sleight of hand in service of long-game punchlines, deploying red herrings and misdirection for comedy. Yes, each season is built around an extended mystery, but the cast and writers of Search Party know how to bluff until the big, left-field reveal with countless diversions and asides. Every episode of Season 1 is a whodunit with new characters, revelations, and teases about the missing Chantal (Clare McNulty). But come the finale — spoiler — she just wanted to get offline for a minute. All clues are left moot. Sure, Dory’s on trial in Season 3, but there’s also room for Elliot having a meltdown, busting out in hives because his book deal is stressing him out.

Season 4 is still game for these asides while Dory’s out of the picture. Portia is stunt-cast as Dory in a movie adaptation of the quartet’s trials so far (and is really bad at playing her best friend). Drew flees to become a theme park performer and falls for a perky, shady princess. All of them running away from their problems, with seriocomic results. They resent Dory for sorta-ghosting them, after believing a fake note Chip leaves for her absence. Drew, Elliot, and Portia even leave Dory a drunk, aggressive voicemail in the first episode. The series’ marks of narcissism and nasty humor continue intact this year.

The show’s also been marked by its deadpan cliffhangers and lightning-fast pacing. It harkens back to ‘50s Ealing Brit comedies, where a dead body is both a problem and a sight gag. A perkier Hitchcock, LOST without the letdown as it avoids any more meaningful, bigger pictures. The shruggy self-centeredness of the leads continues to be a key piece of Search Party’s puzzle. There’s a great subplot about Elliot selling chic guns for a fake FOX News channel, and enjoy a surprise return in episode eight. Still, something’s amiss. And that’s how the Big Plot eats up a lot of the series’ time and energy.

Millennial Misery: It should be noted that the kidnapping defines Season 4, a string of 10 episodes with disturbing depictions and ramifications. This is the closest Search Party has come to inducing full whiplash. Miscommunications at the ice cream parlor cross-edited with damaging psychological torture and women being battered in a basement is, well, tough. Bliss, Rogers, and Showalter’s show and this season’s writing staff try to extract comedy from torture and thrills from escape attempts. Mileage will greatly vary depending on your comic palate; this critic found it exhausting – if not upsetting – after about two episodes.

Where the earlier seasons were chic and jokey Nancy Drew variations, or played with emo John Grisham homage, Season 4 embraces a dark, new mode. Search Party’s satirical thrills with a bent for the Instagram set continues the referential streak by embracing the horrors of Thomas Harris and Stephen King. The poor woman in Buffalo Bill’s well, Annie Wilkes in Misery, and even the deranged Chip having a huge touch of maniacal camp that seems fitting as a John Waters C-level character all play into the proceedings. And arguably it’s a win when Escola and Shawkat commit to cat-and-mouse parlor, but the comedy grows grim.

To Shawkat’s credit, she still finds nervous laughs through the adept ingenue she’s always been on the show. And it may be a tooth-grinding compliment to give, but she’s highly capable of emoting terror, panic, and bafflement without veering into showiness. And Escola, the writer/performer for At Home with Amy Sedaris and National Lampoon’s revised Radio Hour is a scary little thing. Demure, demented, perky, spooky, talented and well-cast. He’s also nerve-wracking to behold in every scene he occupies. But they ultimately eat up so much scenery all season long. It’s draining stuff, easier to remember than a set of arguably great cameos, quirks, and show-defining non sequiturs. So, a word of warning: pay attention.

At its best, the kidnapping is a provocative move. But eventually, the effect is unbearable. Who knew, in the moral spectrum of depicting harrowing situations, missing persons and accidental homicide is easier to plumb for comedy than kidnapping? It’s the presence and discomfort of being in peril for a prolonged period of time that’s hard to grasp.

The Verdict: This is Search Party’s most-morbid season to be certain. It’s recommendable to die-hard enthusiasts of the show’s willy-nilly grotesqueries, but people looking for this fan fave’s true-crime comedy may feel like they’re searching for something missing themselves.