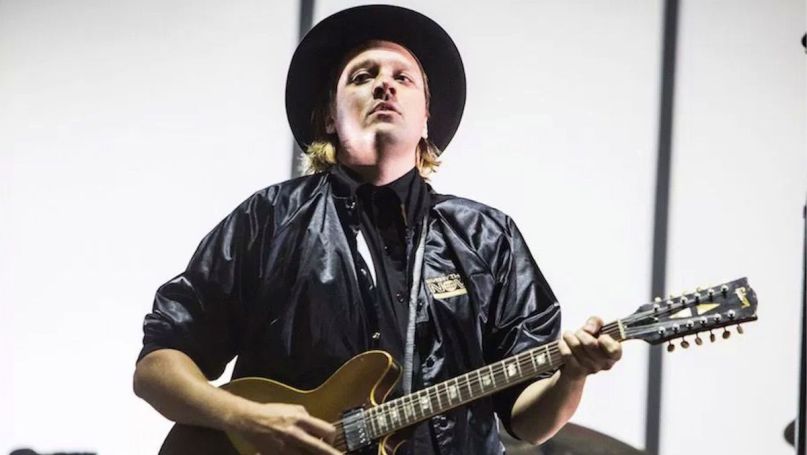 In 2013, Arcade Fire and Owen Pallett wrote the score for Spike Jonze’s Oscar-nominated film Her, which starred Joaquin Phoenix and Scarlett Johansson. For whatever reason, the soundtrack was never properly released either digitally or physically, but next month that’ll finally change.

The Canadian-turned-New Orleans indie-rock institution and their frequent collaborator have announced that they’re officially issuing the Her (Original Score) on digital, vinyl, and cassette formats in mid-March. The soundtrack, which was nominated for “Best Original Score” at the 2014 Oscars, will be broken up into 13 songs and come packaged with a unique album cover that’s not a mere crop of the film’s promo poster.

Her was a strange sci-fi tale about a man who falls in love with an AI entity that he can only hear, because she doesn’t have a physical form. It was a beautifully shot film with an eerie yet also quite touching mood that Arcade Fire and Pallett captured wonderfully in their soundtrack.

In a reflective statement that accompanies today’s news, Arcade Fire frontman Win Butler said that it was an honor to be asked to score the movie and that the process of making it was extremely rewarding.

“There is a mysterious alchemy in the way sound and picture work together, notes and moods shifting and reacting to one another like a kaleidoscope,” he said. “And even in the absence of visuals, the emotional landscape still remains. We hope you have a moment of stillness to get lost in the music as we did writing and recording it.”

Pallett also shared his own anecdote about working on the project. “The band had been talking about this ongoing soundtrack project with Spike for about a year before they asked me to come in to help wrap things up,” he said. “It seemed as if the soundtrack had originally planned to connect with the sci-fi aspects of the story, but Spike was urging a shift toward the score emphasizing the romantic element.”

The score will be released digitally and physically on March 19th, and pre-orders are set to go live this Friday.

If we’re lucky, this won’t be the only Arcade Fire music to arrive in 2021. Last fall, Butler revealed that the band had written “two or three” albums in quarantine, and that’s in addition to the one they were ready to start recording before lockdown restrictions went into effect.

Last year, the band’s guitarist Will Butler (brother of Win) released a solo album called Generations and appeared on Kyle Meredith with… to discuss it and drop hints about his band’s next offering. Pallett also released a solo album last year, titled Island, and he’ll appear on that upcoming Xiu Xiu record alongside Grouper, Sharon Van Etten, and others.