Reimagining tracks from Live Forever in a DIY venue-style basement 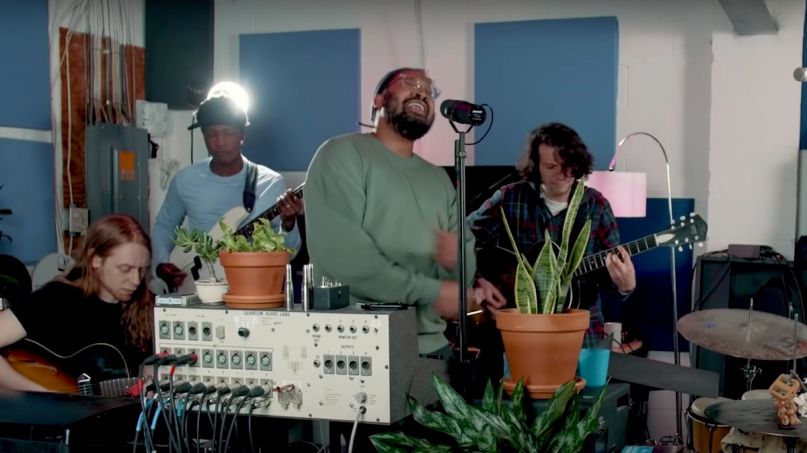 Bartees Strange has become a marquee indie rocker after dropping one of the best albums of 2020. Now, he’s brought those songs to life in the shape of a simultaneously laid-back yet energetic Tiny Desk (Home) Concert for NPR, which you can watch below.

There’s already an electrifying feel to Live Forever, yet Bartees Strange knows that the best way to bring the songs from his debut studio album to life is by making them sound even more magnetic. Joined by his bandmates in a DIY venue-style basement, he had a few tricky switch-ups to make his Tiny Desk setlist — which consisted of “Boomer”, “Mustang”, “In a Cab”, and “Flagey God” — sound completely fresh. Leave it to a musician as undefinable as Strange to act like reinventing the wheel is no big deal.

In between a song break, the Washington D.C.-based musician used the platform to praise other artists inspiring him lately. “A record that came out this year that really hit me was by Yves Tumor. That record seriously tore me up, Heaven to a Tortured Mind. It’s outstanding stuff, and when I heard it it really spoke to me,” he said. “And Aaron Dessner for being the indie rock Michael Jordan. Dude, he inspires all of us. The work he did this year: the Taylor [Swift] record, Big Red Machine stuff, The National stuff. As a producer and a person who makes stuff, it’s so wildly inspiring to see someone work like that.”

So far, 2021 is shaping up to be a well-deserved victory lap for Strange. Last month, he made his national TV debut performing the tour-de-force single “Boomer” on Late Night with Seth Meyers, and we highly recommend revisiting it.