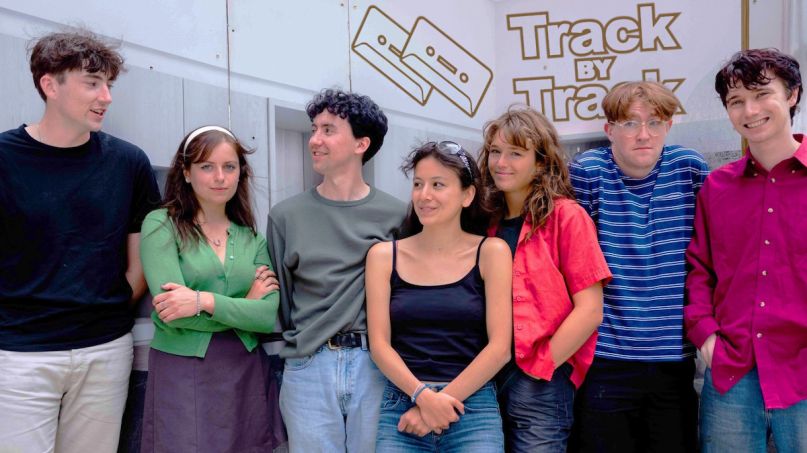 With our Track by Track feature, artists guide listeners through each song on their newest release. Today, Black Country, New Road break down their debut album For the first time.

British septet Black Country, New Road have just released For the first time, their debut full-length and one of the most anticipated albums of the year. Stream it below via Apple Music or Spotify, followed by a complete Track by Track breakdown.

For the first time sees each band member working together to blend jagged punk guitars, low-key jazz, and eccentric wordplay. It’s been less than two years since Black Country, New Road broke onto the scene with “Sunglasses” and “Athens, France” — both of which appear on the album as new re-recorded versions — yet they’re already proving they’ve grown exponentially since those gigs opening for Fat White Family, black midi, and Squid.

The album only spans six tracks, but each one packs a punch, including the previously released singles “Track X” and “Science Fair”. It all adds up to form a 40-minute-long runtime — almost the exact length of one of their shows, which isn’t a coincidence. Recorded last spring with producer Andy Savours (My Bloody Valentine), For the first time is explicitly meant to capture “exactly how [they] love to sound live.”

In a statement, saxophonist Lewis Evans explained that the band chose to display more conscious control over their sonic range when recording For the first time. “We’ve since learnt our best asset: We can play quietly,” he said. “We’ve taken that and used it so it’s more dynamic. Intensity worked for us with those early recordings, like, ‘Oh my god, this band is so intense and angsty,’ but this record is a much more considered approach.”

“Instrumental”:
This track was one of the first pieces we ever played together. It was written mostly by Lewis before our first ever rehearsal and then we finished it together in our friends attic. It’s a good introduction to the band as it’s a perfect musical description of us finding our feet.

“Athens, France”:
“Athens, France” was our first single and it’s changed a little over the past couple of years. It’s another piece of fiction that doesn’t tell much of a complete story. Like a lot of these early songs it was put together very fast and was mostly instinctual.

“Science Fair”:
“Science Fair” is a slightly later track than most of the album. It’s the first we worked on with Luke as a member and was our first departure from a format we had resided in for a while.

“Sunglasses”:
This one was our second single. It has been re-worked a little for the album version, but remains quite true to the original. Another slightly unfinished story and another fairly quickly written song.

“Track X”:
“Track X” is our personal favourite on the album and is the most recently arranged, although it was initially written a couple of years ago. It’s a nice departure from the intensity of the rest of the album and acts as a good reprieve from the more aggressive pieces surrounding it. It’s a simple short story and a little more complete than some of the other tracks on the record.

“Opus”:
“Opus” written the same day as “Instrumental”. With more of a ‘final’ feeling, it made sense to close the album with it. It’s sparse lyrically and tells no real story but some light observations. It’s the closing statement of the album and makes a good full stop.

For the first time Artwork: