This Guy Turned His Dead Uncle’s Skeleton Into a Fully Functional Guitar: Watch

"Now, Uncle Filip can shred for all eternity. That's how he would want it." 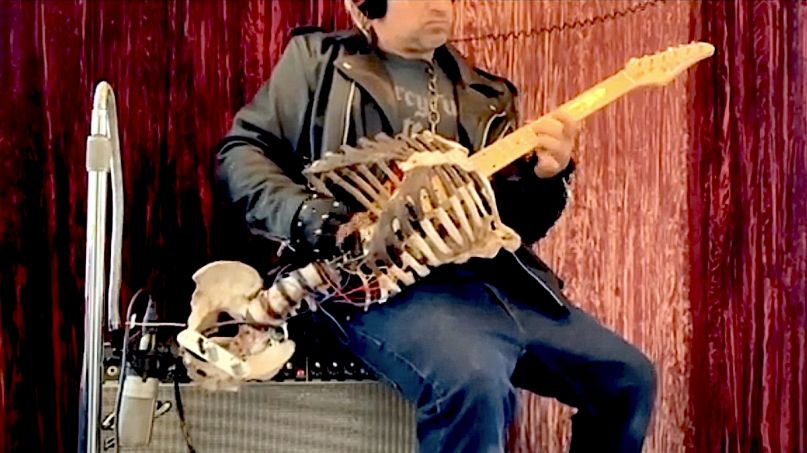 An inventive gentleman has paid the ultimate tribute to his deceased uncle, turning the late metalhead’s skeletal remains into a fully functional guitar. It may seem morbid, but there’s actually a really endearing story behind the “Skelecaster”.

As MetalSucks reports, a man who goes by the moniker Prince Midnight (already we’re off to a cool start) has just finished constructing a guitar out of his uncle Filip’s bones. Definitely a bit freaky, but it has been quite some time since Filip passed. Tragically, he died more than 20 years ago as the result of a car accident.

Filip’s skeleton had been donated to a local college in Greece, where it was used for educational purposes for two decades. When the school no longer needed the skeleton, it was returned to his family. With Orthodox Greeks frowning upon cremation and the cost of burial too expensive, Prince Midnight and family were at a crossroads as to what to do with Filip’s remains.

First, Prince Midnight, who appears to live in Florida, had to deal with a lot of red tape just to gain possession of the skeleton, as he had to file and refile tons of paperwork to repatriate Filip’s remains. After finally receiving the remains, he ultimately decided to pay homage to his metal-loving uncle by turning Filip’s skeleton into a guitar.

As he told MetalSucks:

“So, I got the box of bones from Greece and didn’t know what to do at first. Bury them? Cremate them? Put them in the attic? All seemed like poor ways to memorialize someone who got me into heavy metal.

So, I decided to turn Uncle Filip into a guitar, which proved to be challenging. I did a lot of research and no one has ever made a guitar out of a skeleton. So, I did it. I started out consulting with two guys in Dean Guitars’ wood shop in Tampa but they got cold feet.

Anyways, now Uncle Filip can shred for all eternity. That’s how he would want it. I’m super proud of the project and how it serves to honor him, his life and his influence on me.”

Feeling a little better about the story now? We are, too! In addition to his testimony, Prince Filip provided MetalSucks with photos showing how he put the instrument together and a video of him playing the DIY guitar.

Fittingly, the torso serves as the “body” of the guitar, to which Prince Midnight added a neck, pickups, volume knobs, and more. Written on the headstock is “Filip Skelecaster”, an appropriate name for the custom axe.

One of the pictures that Prince Midnight included was a photo of Filip himself, playing guitar and wearing a Moonspell T-shirt back in 1995. Yes, Filip was indeed a true metalhead.

For a full gallery of photos, we encourage you to visit MetalSucks. In the meantime, check out the video of Prince Midnight playing Darkthrone’s “Transilvanian Hunger” on the guitar below, followed by the aforementioned picture of Filip side by side with the various parts of the “Skelecaster” guitar.

This Dude Built a Guitar Out of His Dead Uncle’s Skeleton https://t.co/5uLxD3Ka6B