Plus, check a new version of "3 AM" featuring Thundercat 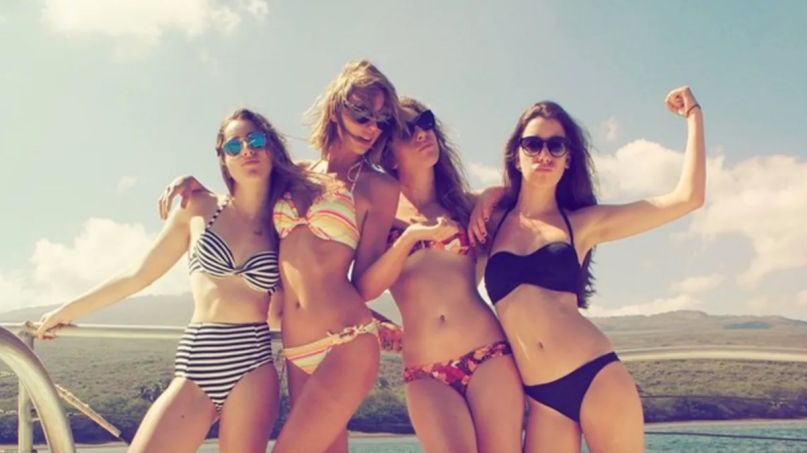 HAIM and Taylor Swift have been friends for quite a while now, and they committed their friendship to wax last year when the sisters hopped on her evermore track “No Body, No Crime”. Now, they’re teaming up once again, this time with Swift putting her own spin on their Women in Music Pt. III cut “Gasoline”.

As eagle-eyed fans pointed out, HAIM started teasing “Gasoline (Featuring Taylor Swift)” earlier in the week with some cryptic tweets and a TikTok video of them cranking the remix together in their car. As could be heard in that audio snippet, this new version of “Gasoline” sees Swift singing gracefully over the original version, all sweet harmonies and luscious tones.

Swift had long been hot on “Gasoline” according to a statement from the sisters. “since we released wimpiii in june, taylor had always told us that gasoline was her favorite,” they wrote. “so when we were thinking about ways to reimagine some of the tracks from the record, we immediately thought of her. she brought such amazing ideas and new imagery to the song and truly gave it a new life. thank you @taylorswift for adding your incredible voice and spirit to a track that means so much to us.”

The Swift-featuring “Gasoline” remix comes from a new deluxe edition of Women in Music Pt. III that’s out now. The expanded tracklist also includes a remix of “3AM” from Thundercat — an event that came together somewhat serendipitously. According to the band, “this past december, we were in the studio working on a cover and at the end of the session este mentioned that we’d always imagined 3 am as a duet. minutes later thundercat hopped on the song and put his magical twist on it.” They added, “thank you @thundercatmusic for always keeping us laughing and sending us the best memes. we are ready for dragonball durag pt. 2.”

Take a listen to both tracks below.

This deluxe edition of Women in Music Pt. III feels like victory lap for HAIM, who celebrated their 2020 album with Paul Thomas Anderson-directed music videos and multiple Grammy nominations. The trio capped off the year by reworking “Christmas Wrapping” into a Hanukkah song and then announced they’re scoring Netflix’s new animated musical The Witch Boy.

Swift has been plenty busy with new music of her own, too. Fresh off the release of folklore and evermore, she recently announced a re-recorded version of Fearless is on the way and gave fans a taste of the album with “Love Story (Taylor’s Version)”. Expect to hear a lot more about that record once it drops, especially considering she could be eligible for Grammys all over again just for flipping off Scott Braun in a unique way.