"This bigot renaissance has come upon us, and I feel like we can’t hide from it anymore" 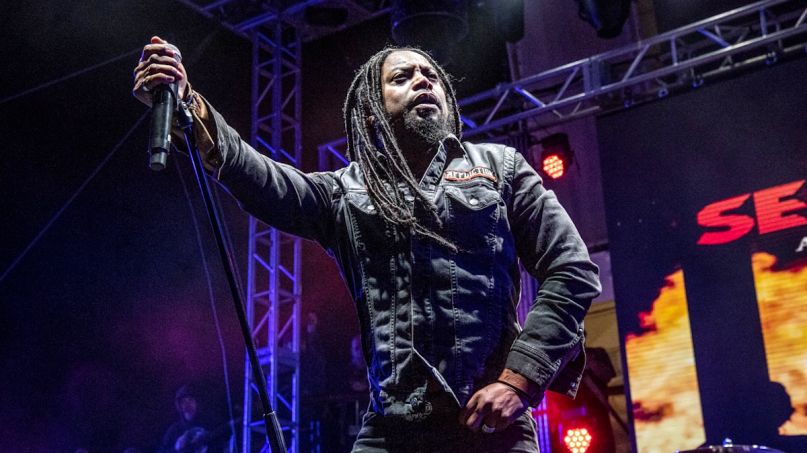 Heavy Culture is a monthly column from journalist Liz Ramanand, focusing on artists of different cultural backgrounds in heavy music as they offer their perspectives on race, society, and more as it intersects with and affects their music. The latest installment of this column features an interview with Sevendust singer Lajon Witherspoon.

Sevendust have been going strong for more than a quarter century, releasing their 13th studio album, Blood & Stone, in 2020. This year, they are celebrating the 20th anniversary of their gold-certified third album, Animosity.


We caught up with singer Lajon Witherspoon to discuss the band’s music, as well as the racial inequality in America, the tumultuous year that was 2020, and more. As a father to three mixed-race children, the rock frontman tells us there were a lot of political and societal lessons to be learned over the past year.

Witherspoon also took us inside Sevendust’s recent livestream concerts, discussing the bizarre feeling of playing without an audience.

Read our interview with Sevendust vocalist Lajon Witherspoon for the latest installment of “Heavy Culture” below, and pick up Sevendust’s latest album, Blood & Stone, here.

On the feeling of creating Animosity 20 years ago

Just being young and carefree and feeling like, “Wow, we’re really in the music industry,” the excitement behind having a producer and knowing that for sure we were going to go on tour. Then having big tours, touring with friends and upcoming bands so it was all a great movement and energy not only for Sevendust but for the metal and rock community in general at that time.

On the songs from Animosity 20 years later

They’re more enduring now, like “Shine,” “Follow”, to think about them now, a lot of it is timeless. You can go back and relate to it and it brings us back to that time in our lives and that’s what I love about music, it puts us in certain moments. All of those songs, “Live Again”, there are so many songs on that album that at that point in our career we weren’t afraid to do slower, melodic songs.

On what the word “animosity” means to him 20 years later

It means what is going on in the world right now, animosity. You can see it with everything that’s unfolding in front of our eyes, that people have regressed. I hate to say it, but people love the fact that this bigot renaissance has come upon us and I feel like we can’t hide from it anymore.

I wish and I pray, like everyone who knows right from wrong, that at the end of the day that we can come to come sort of equality. I don’t think it’ll be all of a sudden and somebody will say, “Damn, I like him now.” But at least respect and have the dignity and integrity to be a good person. I got some animosity.

On the livestream concert experience

It’s the weirdest experience but so much fun because [with the first livestream] at that point we hadn’t seen each other in about seven or eight months and we get together, only the band and maybe three crew members, everyone’s in masks. It was really cool but so odd to try to move the energy and then all of a sudden you’re looking at these cameras. Every once in a while, it was funny because we’d finish a song and it would be like two crew guys clapping. I felt like we had a good time and if there’s anything we could do to bridge the gap of this crazy world we’re living in and navigating through, I feel like music is always a healer and if we can make you feel comfortable in your home and make you feel a little bit normal then let’s do it.

After sitting at home for so long, I’m like, “Am I still that dude in Sevendust? I don’t know.” Some people recognize me with the hair, even with the mask and they’re like, “You still in a band?” and I’m like, “I think!” It was cool to do the livestream and feel like this is what I do and this is our job and livelihood, so I appreciate everyone who was able to be a part of it.

With the [recent] Animosity livestream, it’s so sad that you do this album and unless you’re deep into the band’s music you don’t really get to hear more than two songs. I love that over the years, people have wanted to hear that album in its entirety.

I have had conversations, not only with my children, but with my wife. You have to keep watch and you can’t trust everyone but you thought you could. With 2020, and not to be grumpy about it all, but I think we’ve definitely seen people’s true colors. I keep my kids aware, they know who they are and they know where they come from and they know their heritage from all sides. I just try to keep them positive. It’s been a struggle because one is getting ready to be a teenager who knows and sees more than dad and mom sometimes. We try to keep spirits up and stay positive.

My youngest [daughter] is 12 going on 13, and she’s just amazed at Kamala Harris and women of color — warm-blooded people are just all excited. It’s a new movement. Me and the wife were talking the other night, that Biden has the most diverse team in [U.S.] history. That’s crazy to me, that it took this long. Where have we been? What have we been doing? Who allows this? I just hope that gets better.

It’s beautiful to see [Kamala Harris’] sorority sisters from Howard University, the women and the pride. The swagger! The level of equality and level of understanding that people, not privileged, have gone through — I cannot wait to see the future in the next four years, in the next forever, I hope we can continue to keep this going.

I feel like the timing — everything going on in the world was going on anyway, there was just a veil over it. Everything that was written about was already there; it’s ironic that it’s all fitting in now. We were asked not to put the album out in 2020, wait for 2021 and we felt like it would be silly to sit on it for that long. We’re artists, we’re going to go back and do more music, I can’t wait to do more music. We just put this album out but that’s what it’s about — it’s about that creative energy and especially being home this long, there are even more songs and thoughts and melodies in our bodies and souls that we want to put out there.

I just feel very blessed and I know now that there were a lot of things I took for granted in life that I would never take for granted again. I learned a lot in 2020 and I think I changed a lot. I think I learned that there are some people that I definitely never have to talk to or see again for the rest of my life that I will be fine with. It was good for the cleanup.

On 2021 plans and his debut solo album

On the books for Sevendust, we got rescheduled for October to be in Australia with Steel Panther which will be fun. There are a lot of other things that are up in the air. We will be ready to go when it’s time and safe for everyone.

I got my solo stuff I’m working on and I’ll be signing a record deal and we’ll see what happens. I’ve been writing it for about the last year or two and one of my main writers is Sahaj [Ticotin] from Ra. It’s more bluesy, rock, soulful, it’s got some pop in it too, R&B, guitar-driven too, a little country — it just shows a lot of the stuff that I love.

On Black artists who influenced him growing up

Jimi Hendrix, Chuck Berry, Prince, my dad, Thin Lizzy’s Phil Lynott, Sam Cooke, so many more. I always gravitated towards a showman. I have a cousin who was in James Brown’s band and I got to meet him at one of my uncle’s funerals and I remember [my cousin] Charles coming in and he and his buddies were stars – from the Lincoln limousine car they pulled in to the cool sunglasses and suits no one had ever seen before. I remember him telling me, “You always got to look good, you always got to show up and be a showstopper.” I’m not that but I always thought about that and I remember those people and the flare that they had. Not only the show but the energy they brought with them.