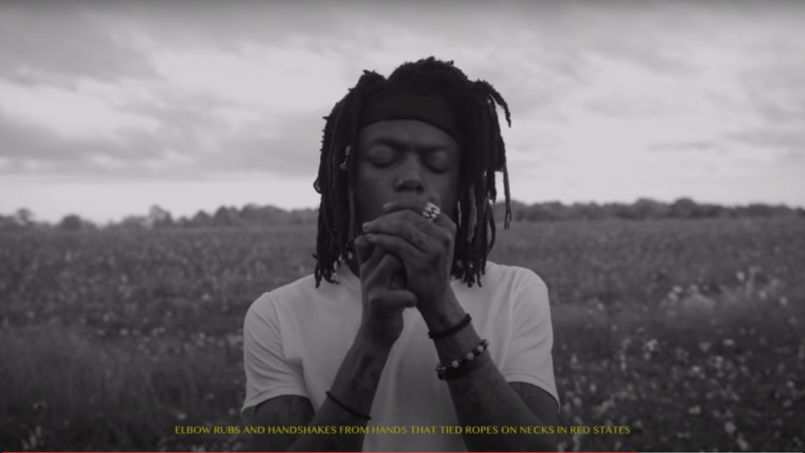 J.I.D packs a history lesson into his searing new track about man’s inhumanity to man with his new track “Skegee”.

“Skegee” takes its title from the infamous and horrifying Tuskegee Study of Untreated Syphilis in the African American Male. The experiment launched in 1932 under the auspices of science, but at its core it was nothing but cruelty. Researchers promised about 400 Black men with syphilis free health care, but instead of offering treatment, they watched hundreds of men die. Proving that the experiment had nothing to do with research, the project continued for decades after penicillin was known to cure syphilis. As The Associated Press reported in a shocking exposé in 1972, “even after penicillin became common, and while its use probably could have helped or saved a number of the experiment subjects, the drug was denied them.”

It’s an ugly moment in American history, and it wouldn’t be a surprise to see an artist approach it with anger. But J.I.D’s take is more philosophical, rapping over a moody beat by Cristo that’s built around heartbroken choral riffs. The MC starts off with a moment of optimism, spitting, “Take a chance, have faith, my lad/ You got all of the same tools all the greats have had.” With his usual sharp wit, he turns to some of the problems facing Black men today. “They got, what’s your thing? Alcohol or the lean?/ Put the coke inside the weed, them n—-s seasonin’ the greens.”

The song contains portions of a speech from former mayor of Tuskegee Ronald D. Williams. “Everyone with knowledge of that study would be terrified,” he said, before paraphrasing the famous words from Robert Burns: “But that study represents and demonstrated the inhumanity of man to mankind.”

From there, J.I.D uses a personal anecdote about a military recruiter to launch into a ferocious, emotional verse about Tuskegee. “It was the 1930s,” he raps, “They did them black folks dirty because a tan/ A man was not a man, n—-, your granny wasn’t grand/ A scam into the plan to go recruit a group of stupid n—-s/ And shoot them up with syphilis instead of shoot to kill ’em.”

“Skegee” comes with a music video co-directed by J.I.D and Michael Kelly. It shows the rapper in black and white, standing in fields where sharecroppers might have toiled. The camera lingers on Black families, especially children, emphasizing the unbroken chain between the men whose lives the study ruined and the hope of the next generation. It’s one of the most thoughtful, powerful musical statements of the year, and you can check it out below.

J.I.D has proved to be a mind-bending MC, but he’s also capable of balls-to-the-wall bangers, as he recently demonstrated on the “Bruuuh” remix featuring Denzel Curry. Last fall, he dropped the new songs “Cludder” and “Ballads”, and he seems to be gearing up for a new solo album. In 2020, he joined up with the hip-hop supergroup Spillage Village for Spilligion, which featured “Baptize”, one of our favorite songs of last year.