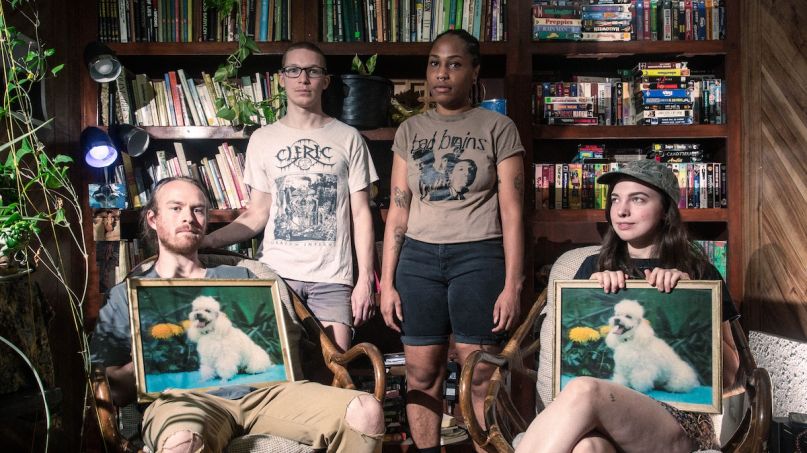 Nashville-based hardcore act Thirdface has teamed up with Heavy Consequence to premiere their new single “No Requiem for the Wicked”. The song appears on the band’s forthcoming debut album, Do It With a Smile, which arrives March 5th via Exploding In Sound Records.

The up-and-coming band features singer Kathryn Edwards, guitarist David Reichley, bassist Maddy Madeira, and drummer Shibby Poole, all seen in one of the best promo pics (above) that we’ve glimpsed in a while. But don’t let the relaxed nature and canine cuteness of the photo fool you, ’cause Thirdface deliver a crushing brand of hardcore.

“No Requiem for the Wicked” follows previous single “Villains!”, and once again showcases Edwards’ powerful scream. The track clocks in at a total of 1:25, entering breakneck speed around the 30-second mark.

“This is my song trying to pick a fight with all those grifters out there who do nothing but take from their communities without giving anything in return,” says Edwards of the new single. “Climbing on the necks of others to get to the top. We all know at least one. We see them. This one touches on us all throwing those people down to the dust to be forgotten where they belong. You Earned This (lyrics), indeed.”

Do It With a Smile is available for pre-order on blue vinyl via the Exploding in Sound webstore or Bandcamp. Check out the song “No Requiem for the Wicked” below, followed by the album art and tracklist.

Do It With a Smile Artwork: