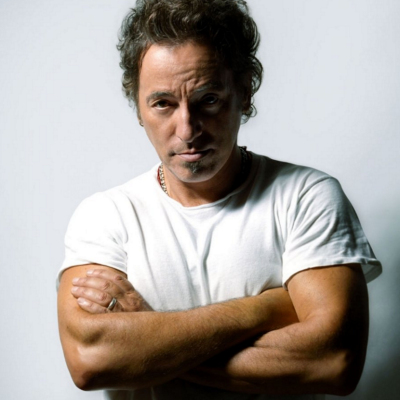 Bruce Frederick Joseph Springsteen (born September 23, 1949) is an American musician, singer, songwriter, and humanitarian. He is best known for his work with the E Street Band, his primary backing band. Nicknamed "The Boss," Springsteen is widely known for his brand of poetic lyrics, Americana, working-class and sometimes political sentiments centered on his native New Jersey, his distinctive voice, and the energy of his live act, with concerts from the 1970s to the present decade running over three hours in length.

Springsteen's recordings have included both commercially accessible rock albums and more somber, folk-oriented works. His most successful studio albums, Born to Run (1975) and Born in the U.S.A. (1984), showcase a talent for finding grandeur in the struggles of daily American life. He has sold more than 75 million albums in the United States and more than 130 million records worldwide, placing him comfortably among the ranks of the best-selling artists of all time. The accolades he has received for his work include 20 Grammys, two Golden Globes, and an Academy Award. In 1999, Springsteen was inducted into both the Songwriters Hall of Fame and the Rock and Roll Hall of Fame.

More recently, Springsteen released a trio of live compilation albums (The Live Series: Songs of the Road, Songs of Friendship, and Songs of Hope) as well as the live album Springsteen on Broadway. On the day after Springsteen on Broadway’s release, a Netflix special of the concert from the album premiered. Springsteen’s most recent album, Western Stars, came out June 14, 2019, to critical acclaim. The album is his nineteenth studio album, first solo album since 2005, and first of entirely original compositions since 2012. Springsteen also released a documentary on the creation of Western Stars. He will record new material and tour with the E Street Band in 2020.

Album Review: Bruce Springsteen Reclaims the Album as His Primary Art Form on Western Stars A-

Album Review: Bruce Springsteen – The Ties That Bind: The River Collection A-

Album Review: Bruce Springsteen and the E Street Band – The Promise B+

Album Review: Bruce Springsteen – Working On A Dream B+

Revisit classics from Dirty Dancing, Philadelphia, Skyfall, and… The Muppets.

Legendary guitarist dissects his own rare and unheard gems.

Relive the history of The Band in first trailer for Once Were Brothers documentary: Watch

Sam Springsteen, 25, will go into the fire as a member of the Jersey City Fire Department.

Plus, Bruce Springsteen teams with John Mellencamp, and DMC collaborates with Debbie Harry.

by CoS Staff
5 comments

The album is a far, confident cry from dead if 2019 tells us anything.

by CoS Staff
30 comments

Little May Settle the Debate of Jonathan Taylor Thomas vs. Devon Sawa

This episode was recorded before the Australian duo broke up.

Featuring live, re-recorded versions of tracks from his latest album.