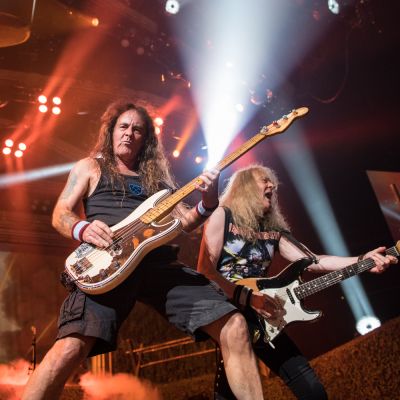 Iron Maiden are a heavy metal band from Leyton, East London. Formed by bassist and main songwriter Steve Harris in 1975, the band is considered one of the most commercially successful heavy bands in history, selling over 100 million copies of their over 39 albums (16 studio, 12 live, 4 EP’s and seven compilations) featuring their zombie-like mascot “Eddie” on the cover of each. The group has won one Grammy Award for Best Metal Performance — “El Dorado” in 2011 and was nominated for two for “Fear of the Dark (1994)” an “The Wicker Man” (2001).

Although the lineup has changed frequently, the most notable members include Steve Harris, Dave Murray, Adrian Smith, Bruce Dickinson, Nicko McBrain and Janick Gers. Their self-titled album debuted in 1980, featured tracks such as “Running Free” and “Transylvania,” reaching number 4 on the UK Albums Chart. Their third studio album, The Number of the Beast, under EMI records, granted the band their first UK Albums Chart No. 1 record. Following this release, the band became immersed in controversy as a conservative lobbying group argued the group were “satanic” because of the track “Invaders”. Yet, this simply gained Iron Maiden more publicity.  Their second album to hit No. 1 in the UK charts was Seventh Son of a Seventh Son (1988), based on the novel Seventh Son by Orson Scott Card. This album was regarded as a part of the band's period of “experimentation,” including the new addition of keyboards to the album and synthesizers on the band's 1986 album, Somewhere in Time, a popular favorite. In 1993, vocalist Bruce Dickinson left the band to pursue a solo career, resulting in a farewell tour. However, Dickinson rejoined the group in 2000 for Brave New World, indulging in a more progressive and melodic sound.

In 2006, Iron Maiden released their 14th studio album, A Matter of Life and Death. The album, featuring lyrics relating to the negative influence of war and religion, earned the band their first top 10 in the Billboard 200 and the Album of the Year award at the 2006 Classic Rock and Roll of Honor Awards. The following album, The Final Frontier (2010), became the band’s greatest commercial success, reaching No. 1 in 28 countries. Although, Harris continually affirmed the band would only release 15 albums, they released The Book of Souls in 2015, the bands fifth UK No. 1 album.

In 2016, the group launched the mobile game, Iron Maiden: Legacy of the Beast. In promotion of the game, the group embarked on a world tour of the same name in 2018 extending into 2019. On September 23, 2019, the band announced the tour would continue into 2020 and released a Tropper bottle cap collection a few weeks later.

Album Review: British Lion Carry the Torch for Classic Hard Rock on The Burning B

Album Review: Iron Maiden – The Book of Souls B-

The Adrian Smith San Dimas SD and SDM models have been fitted with key upgrades and updated specs.

The movie, directed by Mauricio Leiva-Cock (Green Frontier), has been picked up by the film company M-appeal.

Iron Maiden, KISS, and System of a Down Headline Virtual Download Festival

The virtual festival will be streaming June 12-14th via YouTube and social media platforms.

Rock and Metal Album Covers Get Reimagined With Simpsons Characters

Iron Maiden Postpone All 2020 Shows Due to COVID-19 Pandemic, Reschedule Many Dates for 2021

The legendary British metal band put their 2020 plans on hold as the coronavirus pandemic persists.

The set including Live After Death and Rock in Rio is out on June 19th and continues the band’s reissue series.

10 Metal Concert Films to Fill the Void While Social Distancing

We take a look back at the greatest heavy metal concert films of all time in an effort to curb our live music withdrawals.

The festival was set to take place June 12th-14th at England’s Donington Park.

The metal legends show no sign of stopping after being active for nearly 45 years.

by Jon Hadusek
0 comments
Next
Popular