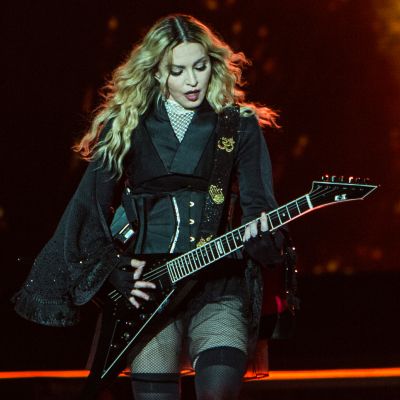 Madonna Louise Ciccone (born August 16, 1958) is a singer, songwriter, actress, and businesswoman. Often known as the “Queen of Pop,” her albums and avant-garde music videos have earned her 7 total Grammy wins and 28 overall nominations. Her roles in feature films, most notably Evita (1996), which earned her a Golden Globe Award for Best Actress, only furthered her mainstream popularity. She often explores other business ventures, including her entertainment company, Maverick, fashion design, children’s books, health clubs, and filmmaking. In total, Madonna has sold over 300 million records worldwide and is one of the best-selling female recording artists of all time. She was inducted into the Rock and Roll Hall of Fame in her first year of eligibility.

Originally, Madonna studied to be a dancer under the noted Martha Graham. While performing as a backup dancer for disco artist Patrick Hernandez in 1979, Madonna met musician Dan Gilroy. Together, they formed her first rock band, the Breakfast Club, where she sang and played drums and guitar. Soon after she left and formed the band Emmy with her then boyfriend, Stephen Bray. Yet, she left soon after to release her debut single, “Everybody”, in tandem with “Burning Up” under Sire records. Both reached No. 3 on the Billboard chart for Dance/Club songs. Following these singles, her upbeat, pseudo-disco, self-titled album debuted in 1983, reaching No. 8 on the Billboard 200.

Madonna’s legacy also thoroughly impacted the fashion trends of the late 1980s with skirts over capris, lace tops, and fishnet stockings. Her popularity only began to increase in velocity with the release of her second album, Like A Virgin (1984), the first album to sell over five million copies in the US by a female musician. Her live performance of the single “Like a Virgin” at the MTV Video Music Awards become one of the most iconic pop performances of all time, with the singer clad in a wedding dress and white gloves atop a hefty wedding cake. Her third studio album, True Blue (1986), comprised of emotional ballads, became her best-selling studio album and remains one of the all-time best-selling records by a woman. Along with her relative influence on modern fashion, Madonna also was known for her sexually-provocative live performances and profane lyrics in an attempt to normalize conversation around sexuality and feminism, as seen in her fifth studio album, Erotica. ‘

However, after the birth of her daughter, Lourdes, the singer slightly reinvented her image, releasing the more stripped-down, yet still mainly electronica, album relating to motherhood, Ray of Light (1998). The work landed her four Grammys including Best Pop Album and Best Dance Recording. In March of 2015, the singer collaborated with artists Avicii, Diplo, and Kanye West on her album Rebel Heart, something she refrained from for most of her career. The singer's fourteenth studio album, Madame X, was released June 14, 2019, and debuted at No. 1 on the Billboard 200. Madonna began her world theater tour shortly after.

Apart from music, Madonna has appeared in 21 films, 10 short films, and three theatrical plays. Her most noteworthy works include the title role in Desperately Seeking Susan (1985), Dick Tracy (1990), A League of Their Own (1992), and Evita (1996), earning her a Golden Globe for Best Actress in a Motion Picture Musical.

Album Review: Madonna Does It Her Way on the Scattered but Joyful Madame X C+

Classic Album Review: Madonna’s Like a Prayer Mixes the Sacred and Profane to Create Her Masterpiece A

Her entire run in Boston has been scrapped on doctor’s orders.

The singer has made it a habit of taking the stage up to two hours later than initially advertised.

Because every genre’s entitled to one good scare.

by CoS Staff
28 comments

The Queen of Pop has never offered a more intimate connection.

Elton John, The Who, Fleetwood Mac, and several other legendary acts are out on the road.

Where Have All the Adult Thrillers Gone?

The Double Jeopardies and Fatal Attractions are a thing of the past — but why?

The tour now kicks off on September 17th at the BAM Howard Gilman Opera House.

Controversial clip shows Madonna and a crowd being gunned down at a nightclub.

The Duffer Brothers are truly dungeon masters of character development.

Album Review: Madonna Does It Her Way on the Scattered but Joyful Madame X

A messy vanity project that only the former Material Girl could make enjoyable.

The follow-up to Rebel Heart has finally hit shelves.