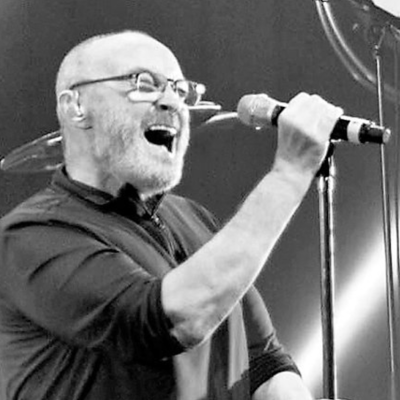 Phillip David Charles Collins (born January 30, 1951) is an English drummer, singer-songwriter, producer, and actor. Starting as the drummer and eventually moving to lead singer of the rock band Genesis, Collins is also a successful solo artist and is known as “one of the most successful pop singers of the '80s and beyond,” with more Top 40 singles than any other 1980s artist. Selling over 150 million units for his eight studio albums, Collins is classified as one of the world’s best-selling artists. Michael Jackson and Paul McCartney are the only other two artists to have sold over 100 million records worldwide for both their work as solo artists and band members. Collins has received eight Grammy Awards, two Golden Globes, and one Academy Award. He was inducted into the Rock and Roll Hall of Fame in 2010 as a member of Genesis.

Prior to Genesis, Collins was the drummer for bands Hickory, Cliff Charles Blues, and played percussion on George Harrison’s “Art of Dying”, off his album All Things Must Pass (1970). In August 1970, after auditioning in Peter Gabriel’s parents' home in Chobham, Surrey, Collins became the official drummer, percussionist, and backing vocalist for Genesis. His first album with the group, Nursery Cryme, was released in 1971. In 1975, Gabriel left the group, resulting in Collins becoming the lead singer. Their first album without Gabriel, A Trick of the Tail (1976), received both commercial and critical success. With Collins as the lead, the band transitioned to a more pop rock sound on albums such as And Then There Were Three, resulting in their first UK Top 10 single for “Follow you Follow Me”. Their 1985 album, Invisible Track, earned them a Grammy nod. However, Collins left the band indefinitely in 1996.

In 1981, Collins released his first solo album, Face Value, primarily about his recent divorce. The album featured the hit song “In the Air Tonight”, reaching No. 2 on the UK Charts. The song employed the gated reverb drum effect, becoming the staple technique used by the musician. In February 1984, Collins released the song “Against All Odds” and received a Grammy win for Best Pop Vocal Performance by a Male. Collins’ most successful album, No Jacket Required (1985), featured contributions from Sting and ex-bandmate Peter Gabriel on “Take Me Home”. Although criticized as too “commercial,” the pop album received three Grammy awards including Album of the Year. His 1989 album, ...But Seriously, received similar praise with the lead single, “Another Day in Paradise”, calling for action against the growing homelessness rate. The album is listed as one of the best-selling albums in UK chart history and won the Grammy award for Record of the Year in 1991. Collins also wrote, performed, and produced the soundtrack to Disney’s Tarzan (1999), winning him both an Academy and Golden Globe award in 2000.

Although Collins stated he was officially retiring in 2011, the musician signed a deal with Warner Music Group to remaster his eight studio albums along with an array of unreleased material. Following their release in 2016, Collins published his autobiography, Not Dead Yet, on October 25, 2016. Since June 2017, Collins has been making his way around the globe on his Not Dead Yet tour, playing a combination of his best hits and parts of his 2019 albums Other Sides and Remixed Sides.

A rundown of the gear you’ll need to conjure the sound of the epic fill.

Phil Collins, Tony Banks, and Mike Rutherford will return to the stage this fall.

Phil Collins, Tony Banks, and Mike Rutherford are getting back together after 13 years.

10 Progressive Rock Concept Albums Every Music Fan Should Own

A collection of top-notch works of eclectic complexity and profound storytelling.

The newly commissioned sculpture might also be “the biggest baby Jesus statue in the world.”

Because every genre’s entitled to one good scare.

by CoS Staff
29 comments

As part of a six-song set on Live Lounge promoting the pop star’s new album, Lover.

Their first such performance together in 12 years.

Listen to a track from each collection now.