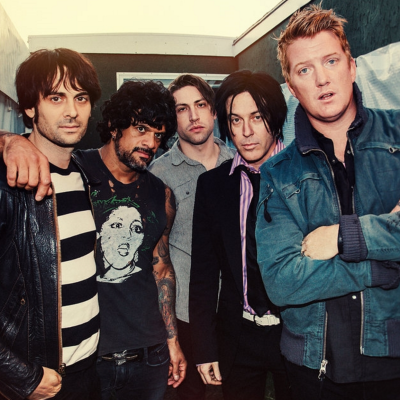 Formed after the dissolution of Homme's previous band, Kyuss, Queens of the Stone Age developed a style of riff-oriented, heavy rock music. Their sound has since evolved to incorporate a variety of different styles and influences, including working with ZZ Top member Billy Gibbons and steady contributor Mark Lanegan.

Album Review: Queens of the Stone Age – Villains B

Album Review: Queens of the Stone Age – …Like Clockwork B+

Mini Mansions on Sharing a Dark Duet with Alison Mosshart

Frontman Michael Shuman tells the stories behind Guy Walks Into A Bar.

After a 16 year hiatus, Josh Homme may be reviving his storied Desert Sessions.

Torrential rain couldn’t stop this all-star pilgrimage from making it to LA’s The Forum.

Preview: Joshua Homme gets festive in Christmas episode of The Alligator Hour on Apple Music’s Beats 1

Get an exclusive sneak preview at the the Queens of the Stone frontman’s holiday edition of The Alligator Hour on Apple Music’s Beats 1.

Plus, the QOTSA mastermind reads “‘Twas The Night Before Christmas” with his wife Brody Dalle and their children.

Featuring a rendition of “Silent Night” and a reading of “‘Twas the Night Before Christmas”.

Frontman Jesse Hughes hasn’t forgotten about the name Axl Rose bestowed upon his band 12 years ago.

The Queens of the Stone Age frontman is back with his Season 3 of his show “Alligator Hour” on Apple Music’s Beats 1.

Björk, Foo Fighters, and The White Stripes have all benefited from working with the French filmmaker.

Thanks For Everything is a new seven-track EP which finds Third Eye Blind covering songs by an eclectic range of artists.