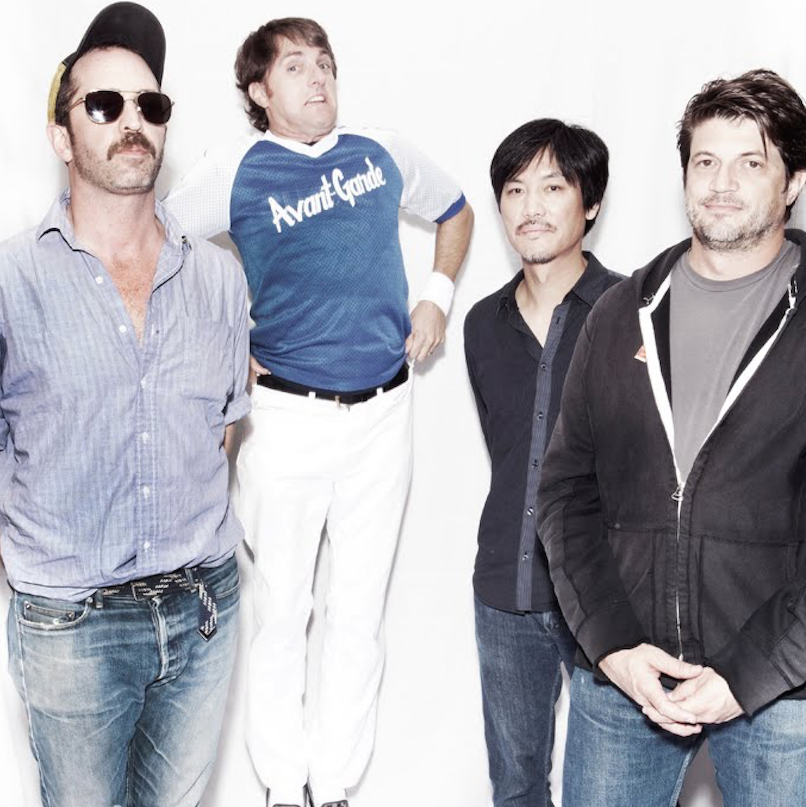 Component is a section of Aux.Out. for one-off pieces, special editorials, and lost orphans of the music discussion. Today, Robert Ham talks to Chavez about the reissue their two classic albums, Gone Glimmering and Ride the Fader, and why there is still hope for a third.

Chavez has never really broken up. The New York quartet has kept the flame lit for nearly 20 years now but has only brought it out for short public viewings since the release of their last album, Ride the Fader, in 1996. The last time all four members — singer/guitarist Matt Sweeney, guitarist Clay Tarver, bassist Scott Marshall, and drummer James Lo — were onstage together was in 2012 at I’ll Be Your Mirror festival organized by All Tomorrow’s Parties and Portishead. And that third album that they’ve long talked about making has never materialized.

“I think James is really sick of it,” says Sweeney, speaking from his apartment in the East Village. “It’s on me a little bit, and it’s on Clay a little bit, but it’s not on James. We’re always calling him up and going, ‘We’re going to get it together and do it,’ but then another opportunity comes up, and we have to put it aside.”

Central to the story of Chavez circa 2015 is the fact that people would actually love a new record from these guys. Like many bands that burned fast and bright in the wake of Nirvana’s groundshaking success, they’ve managed to gather scores of new fans even with a dearth of new material and scant few live dates. Hence, the release of a career-spanning box set Better Days Will Haunt You in 2006 and, this week, the reissue of their albums Gone Glimmering and Ride the Fader on vinyl.

It’s all welcome news for the band, yet it’s cut through with a bittersweet tang. When the band consciously uncoupled around 1998, the feeling in the air was that people didn’t really give a shit. They’d have great shows in New York, Chicago, San Francisco, and some of the other bigger US markets. Everywhere else, they faced half-filled venues, disinterested audiences, or both. Soldiering on was an option, but when other opportunities came up, the decision to follow those paths was easy to make.

“It was hard to say, ‘No dude. You shouldn’t take that job because we still play to no people,’” Sweeney remembers. “Other things were happening, and we couldn’t in good conscience keep people from them.”

The dissolution of Chavez is really a mirror image of the way they started. By the time the band formed in the early ‘90s, most of its members had been around the block a few times in the music industry. Lo had played drums for noise rock outfit Live Skull, and Tarver was one of the founders of major label-anointed post-punks Bullet LaVolta, groups that spent their fair share of time grinding away in the underground rock circuit. Bringing all that experience to bear on this new project meant that everyone had a long list of things they didn’t want to do or have done to them.

“Those guys were like, ‘I don’t want to play with bands that we don’t like. I don’t want to be in El Paso sleeping on some junky floor wondering what I’m doing with my life,’” Sweeney says. “When James joined, his only stipulation was that we only make something that’s really good and engaging and not frustrating for us to do.”

The albums and other stray songs that they recorded over the course of about three years are unabashedly huge, with shit-hot guitar riffs leading the charge and Lo’s pummeling, stuttering drums threatening to bash through the center of the stereo field. It was the embrace of classic rock’s more dusted moments — the tingling psychedelic bridge in “Don’t Fear the Reaper”, the Stockhausen-esque synthesizer trills that kick off “Baba O’Riley” — with the artful dodging of all the cookie-cutter bullshit being touted as “alternative” in those heady days of the ‘90s.

The strange alchemy of Chavez was that if picked apart, the individual pieces didn’t look like they had any logical way to connect. Lo’s rhythms always seemed to be working against or around the rest of the band. The dual guitar lines sometimes worked in tandem, but often were taking off on individual flights of fancy. Songs like “Break Up Your Band”, “The Guard Attacks”, and “You Faded” halted and sputtered and restarted as much as they plowed forward. Yet, as strange as they seemed to get at times, you couldn’t resist breaking out your air guitar as you listened, and you’d find yourself humming one of their tunes many hours later. Many bands say they were going to make music that they’d never heard before; Chavez actually pulled it off.

All of the band’s other goals were met along the way as well. They worked only with producers they liked (Bob Weston, John Agnello, and Bryce Goggin) and in studios they wanted to check out. They took the gigs they wanted to take, like those spots opening for Cheap Trick and Shellac. And they refused to take much of anything outside of that seriously.

The albums themselves were sacrosanct, an irony-free zone (outside of maybe the intentionally bad hand-drawn portrait of the group on Fader’s inner sleeve). Everything else was fair game. They made goofball promos — the clip for “Break Up Your Band” has them providing the soundtrack to some male exotic dancers, while “Unreal Is Here” portrays them as rich rock stars trying to stay down-to-earth even as they’re soundchecking at the Hollywood Bowl — and a hilarious video tour diary that was more staged sketches than backstage antics.

As much fun as it was, the center couldn’t hold for Chavez without an audience willing to support them. When the chance came for Marshall and Tarver to start doing film and writing work, they both leapt. Lo moved on to work with artists like VAST and John Zorn. And Sweeney became a much in-demand hired gun backing up everyone from Johnny Cash and Dixie Chicks to El-P and Bonnie ‘Prince’ Billy. Every once in a while, the four will get back together for a show or to do promotion for things like these vinyl reissues. Otherwise, though the band hasn’t officially split, Chavez is in a perpetual state of limbo.

“I was really bummed about it,” Sweeney says of the end of the band’s initial run. “For five years, I couldn’t listen to the records. I didn’t want to think about it. Maybe things will align and we’ll make that third record. On some level, I would love us to make a record better than we made before. Sixteen years later, and I still want that.”

Robert Ham is a writer in Portland, Oregon. His work has been seen at the Portland Mercury, Paste, Alternative Press, Wondering Sound, and many more. He tweets.