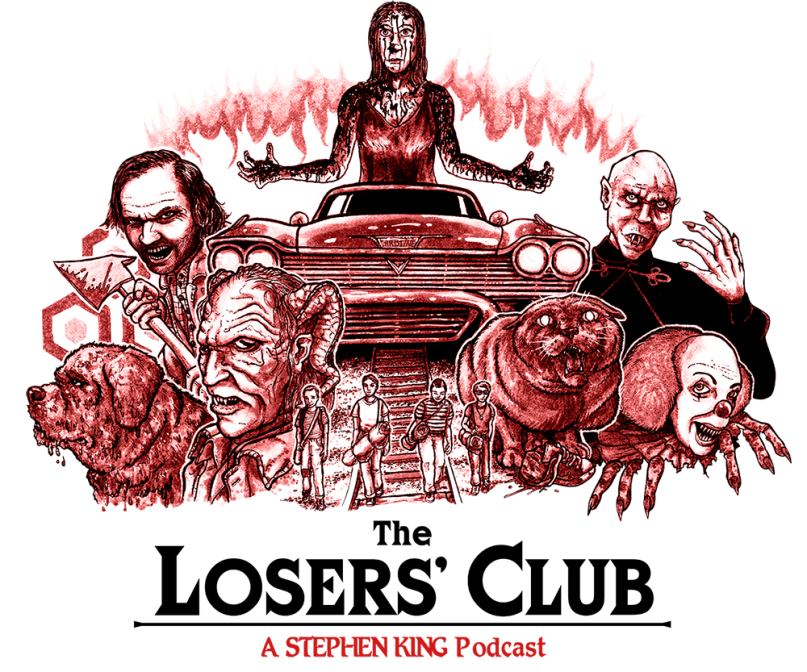 Founded in January 2017, The Losers’ Club® is a weekly podcast for Constant Readers, horror hounds, and new fans of Stephen King to dig deep into the author’s oeuvre and the myriad TV, film, print, and stage adaptations of his work.

Each episode, the Losers gather together to read between the iconic pages and share the latest in King’s Dominion, whether it’s the author’s oft-controversial tweets, the boldest Hollywood headlines, or his endless forthcoming projects.

What’s more, the series also features a number of special guests from various King-related productions. In the past, the Losers have spoken to Thomas Jane, Mick Garris, Jerry O’Connell, Mary Lambert, Wil Wheaton, and many, many more.

Join them as they carry out their journey through long days and pleasant nights.

Randall Colburn: Randall is a senior writer at Consequence of Sound, as well as a contributing writer at The A.V. Club and The Guardian. An occasional playwright, he’s seen his work produced or developed at Writers’ Theatre, Playwright’s Horizons, The Public Theatre, and the Alliance Theatre. As a storyteller, he’s written and performed around Chicago with Mortified, Second Story, The Paper Machete, and Write Club.

Mel Kassel: Mel is a writer who lives in Chicago. Her short stories often incorporate animals, transformations (grotesque and otherwise), body horror, and strange desires. She’s a first reader for the magazine Liminal Stories. She works as a veterinarian’s assistant at an animal hospital. She will soon be moving to Iowa City to join the incoming cohort of the Iowa Writers’ Workshop, where she’ll earn her MFA degree.

Dan Caffrey: In August 2017, Dan moved to Austin, Texas to pursue his MFA in Playwriting at the University of Texas. Currently, he works as a senior writer with Consequence of Sound, and has also written for The A.V. Club, Pitchfork, Vox, and Comic Book Resources. In the past, his plays have been produced by Chicago Dramatists, The One-Minute Play Festival, The Right Brain Project, The Ruckus, and many more.

McKenzie Gerber: McKenzie currently lives in Chicago, IL. He previously graduated from Florida State University in 2006, majoring in Theater with a minor in Film Studies. He began writing reviews for Consequence of Sound in 2014. Currently, he spends most of his time writing music, recording podcasts, and reading quite a bit of Stephen King. He also serves as the head videographer for The Losers’ Club when he’s not serving the beam.

Jenn Adams: Jenn is a Nashville native and co-host of The Horror Virgin podcast. After teaching elementary music for 13 years, she now works as a content writer and curriculum specialist. She writes about horror, feminism, and mental health in The Horror Virgin blog and will gladly talk your ear off about Stephen King.

Michael Roffman: Since 2008, Michael has served as Co-Founder and Editor-in-Chief for Consequence of Sound, annoying everyone on a daily basis as the world continues to crumble. Currently, he spends most of his free time reading Stephen King, rooting helplessly for the Miami Heat, obsessing over Steve Harrington, and wishing he was lost somewhere in the ’70s.